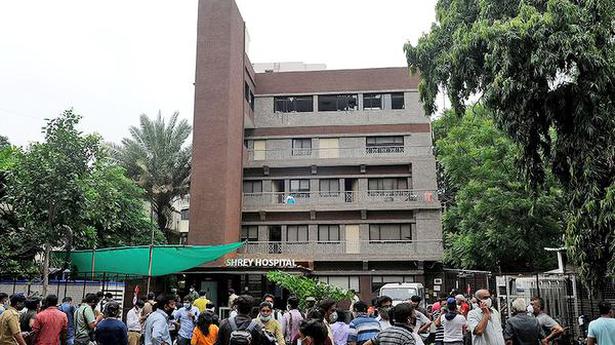 The decision was taken after a State government-appointed two-member inquiry committee, comprising senior IAS officers, submitted its report to the state government on Monday.


The Gujarat government on Tuesday said a judicial inquiry will be conducted by a retired judge of the High Court into the fire at Shrey Hospital here in which eight COVID-19 patients were killed.

The decision was taken after a Gujarat government-appointed two-member inquiry committee, comprising senior IAS officers, submitted its report to the state government on Monday.

“Chief Minister Vijay Rupani has decided that a retired High Court judge will probe the fire incident at Shrey Hospital so that no person responsible for it goes scot-free, a release issued by the state government said.

The retired judge for the probe will be appointed at a later stage, it said.

In their report submitted on Monday, they said the primary cause of the fire was short-circuit in a medical equipment, which spread in the hospital’s Intensive Care Unit (ICU) in next three minutes.

The report said this was an accidental case of fire.

On August 6, eight patients died in the blaze in the ICU ward of Shrey Hospital in Navrangpura area of the city.

The fire broke out around 3.30 am on the top floor of the four-storey hospital, a designated facility for treatment of COVID-19 patients.

A para-medical staff member of the hospital was injured in the incident.

Shrey Hospital was one of the 60-odd private medical facilities authorised by the Ahmedabad Municipal Corporation to admit and treat coronavirus patients.

After the incident, nearly 40 COVID-19 patients, who were undergoing treatment in the hospital’s general ward, were shifted to the civic-run Sardar Vallabhbhai Patel Hospital.