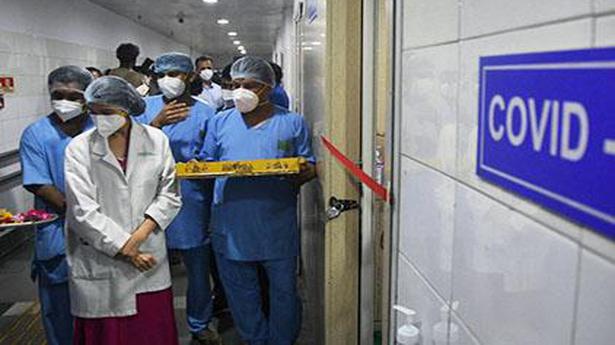 The total number of COVID-19 cases in the city crossed one lakh on Monday with 1,379 new infections being reported in the past 24 hours, stated a health bulletin released by the Delhi government on Monday. The total number of cases now stands at 1,00,823.

AIIMS Director Randeep Guleria told The Hindu that if the trend of comparatively low new cases continues for the next 5-7 days, then Delhi could have passed the peak of COVID-19 cases. “If this trend continues, then we could say that we have had a peak and now we are on the downward side. Cases have come down from almost 4,000 to 2,500,” he said.

Of the total cases, 72,088 people have recovered and there are 25,620 active cases. Though the new cases fell below the 2,000 mark after 20 days on Monday, the number of samples tested on Monday was also low. While 13,879 samples were tested on Monday, the last three days had reported more than 23,000 tests per day.

Explaining the possible reasons for the drop in cases, Mr. Guleria said: “Once you reach a saturation point and a large number of people get infected and you are strict in contact tracing and isolation, then you do two things: one, you break the chain of transmission; and second, if you have significant number of people who have recovered, they cannot spread the disease to someone else, as their chance of reinfection is low. They are like an immune group.”

Mr. Guleria added that in areas of dense population where a high number of cases were reported “some degree of herd immunity possibly has been developed”.

He said that the number of cases seems to have stabilised in the city, despite the number of tests going up over the past 20 days. “This suggests that we are plateauing off in terms of number of cases. There is a flattening of the curve, but we still need to monitor it till the 15th and 20th of this month,” he said.

“We have to be aggressive in testing, contact tracing, isolation and maintaining social distancing. If we let our guard down, then cases will come back in a big manner,” he warned.

“As the city observes a steady increase in the number of cases, the government has ramped up installation of ICU beds in RGSS hospital from 45 to 200, and in LNJP Hospital from 60 to 180,” Mr. Kejriwal said.