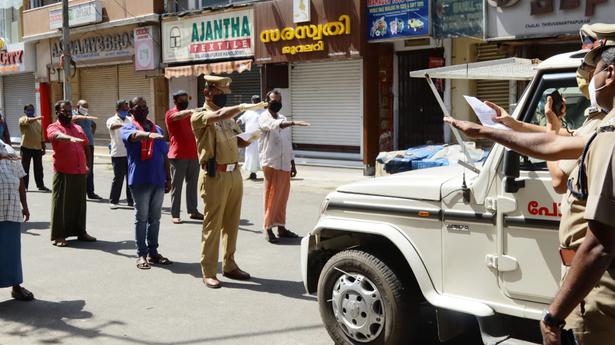 Groups in Thiruvananthapuram, Alappuzha and Malappuram begin an attempt to implement the pandemic prevention code via consensus, persuasion and peer pressure


The Kerala police on Wednesday attempted to rope in members of resident associations and trader organisations to champion the cause of wearing masks and ensuring physical distancing norms in public.

Also read: How Kerala responded to the COVID-19 situation in the State

In Chalai, a usually busy commercial area in the State capital, police and citizens took a joint pledge to adhere to social distancing protocol to contain the spread of COVID-19. City Police Commissioner Balaram Kumar Upadhyaya administered the oath.

The police have sought the help of community-based groups in Thiruvananthapuram, Alappuzha and Malappuram to implement the pandemic prevention code via consensus, persuasion and peer pressure.

The districts had witnessed a surge in cases and formation of large community clusters from which the infection threatened to radiate out to outlying localities. The police would implement the model across the State if found successful.

State Police Chief Loknath Behera has termed the experimental strategy “closed group” initiative. T. Narayanan, District Police Chief, Kollam, had formulated the scheme and found it to be successful in some measure.

The method had also, arguably, lessened the hostility towards the attempts by the authorities to restrict mobility and regulate retail trade, curb livelihood ventures and constrain social life to prevent the pandemic from spiralling out of control.

The police have also enlisted traders and labour union members to enforce the protocol in market places.

Supermarkets and businesses have been asked to form such squads in their precincts to curb the risk of transmission caused by overcrowding.

The civilian squads would limit the number of shoppers at markets.

Merchants Associations have offered to afford board and lodging for drivers of inter-State freight lorries.

Neighbourhood watch committees would call on households under quarantine. Mr. Behera has also suggested that school teachers involved in the Student Police Cadet programme be enlisted as Special Police Officers to ensure the COVID-19 protocol.

He has also formed special units at the station house level to use mobile phone tracking methods and plainclothes officers to trace those who had come into contact with infected persons.