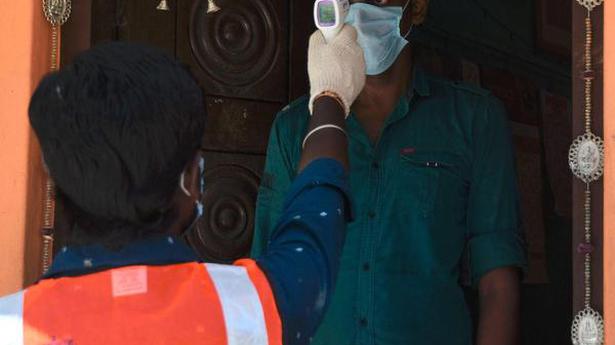 It was lack of a job that made 35-year-old Kumaresan (name changed) take up the temporary job as a “focus volunteer” with the Greater Chennai Corporation (GCC) to monitor and help COVID-19 patients. But now, this job for him, has become a form of service to the community.

Mr. Kumaresan, a resident of Saidapet, holds a diploma in mechanical engineering, and had been doing odd jobs to support his family, including his wife and parents. “I was working as an Aadhaar enrollment staff member at a bank. It was a temporary job, and I lost it during the lockdown,” he says.

When he came to know about GCC calling for focus volunteers, as part of its Home Quarantine and Isolation Management System (HQIMS), he eagerly took it up despite the health risks involved. “My wife did not want me to go, but since it would fetch me ₹15,000 I took it up,” he adds.

His main work is to ensure that people under home quarantine do not come out of their houses and also to provide them with whatever they need. In the morning, he gets a list of people who have undergone COVID-19 tests as they have Influenza Like Illnesses (ILI). He sticks green stickers outside their homes and monitors them for three days, till their results arrive.

“I have been given six streets. I start work at 7.30 a.m and it goes on till 2 p.m. We have to keep updating the status of each patient on the GCC Corona Monitoring App,” explains Mr. Kumaresan.

The GCC has provided him with a mask, gloves, sanitisers and glasses. “The patients text me whatever they need and I purchase it for them. I have been doing this job for the past one month. Initially, some quarantined persons came out, but after repeated warnings, no one steps out now,” he adds.

At the end of the day, he thoroughly disinfects himself before entering his house. “Its now a form of service for me. Many people thank me over text messages,” he says.

In Kamu Iyer’s passing, Mumbai loses one of its last modernist...