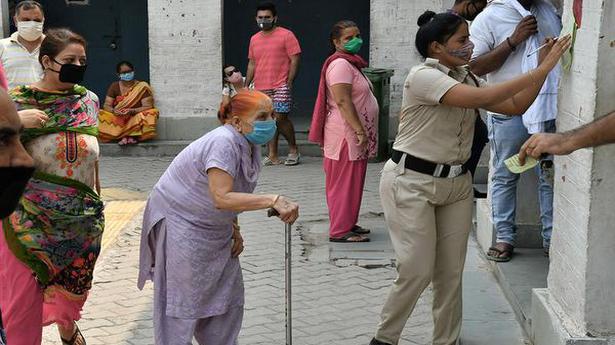 As many as 4,263 new COVID-19 cases were reported in Delhi in the past 24 hours, taking the tally to 2,25,796, according to a health bulletin released by the Delhi government on Tuesday.

The city also witnessed the highest number of tests conducted in a single day — 62,669. The Capital, however, did not report a record number of cases as the positivity rate (percentage of people testing positive for every 100 tests done) is currently at 6.8% — the lowest since August 19, when the rate was 6.7%.

Deputy Chief Minister Manish Sisodia, who tested positive for the virus on Monday, is now stable, though he has fever, said sources. “His fever comes and goes, but he is fine and his oxygen levels are in the required range. He is under home quarantine,” a source in the Aam Aadmi Party said.

The city has also reported 36 more fatalities, taking the death toll to 4,806.

Of the total cases, 1,91,203 people have recovered and there are now 29,787 active cases. The number of containment zones in the city has jumped to a record 1,560. “The Chief Secretary holds a daily review meeting with all District Magistrates (DMs) where cases, positivity rate and containment zones are discussed. The DMs have been instructed to create more containment zones, especially micro-containment zones, to check the spread of the virus,” a Delhi government official said.