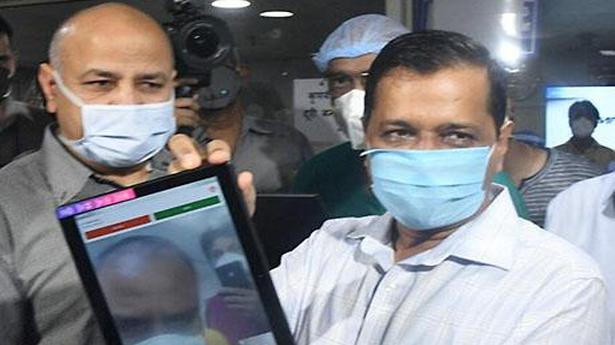 Chief Minister Arvind Kejriwal on Monday said the recovery rate of COVID-19 patients in the city has gone up to 72% and more people were recovering from the virus on a daily basis.

There has also been a considerable dip in the positivity ratio and the death rate in Delhi, he added.

Mr. Kejriwal further said that the plasma bank set up by the government had yielded positive results.

Indicating that the demand for plasma is more than its supply, Mr. Kejriwal appealed to recovered patients to donate plasma.

“In the last three months, the total number of COVID-19 patients in Delhi has reached approximately 1 lakh. But there is no need to worry as out of the total cases, 72,000 have recovered. The recovery rate in Delhi has gone up to 72%,” he said.

“We started the country’s first COVID-19 plasma bank. There was chaos until now and people who wanted plasma were running from pillar to post as they did not know where to go. People are now getting plasma through the bank at the ILBS Hospital,” he added.

Since the plasma bank started last Wednesday, there has been a mismatch between demand, which is huge, and the supply, which is less, he said.

Appealing for donations, the CM said, “There is no need to worry, there is no pain or weakness and transportation too will be arranged by the government.

A team of doctors is currently calling up recovered patients and appealing to them to donate plasma. “If you receive any such call please say yes,” he said.