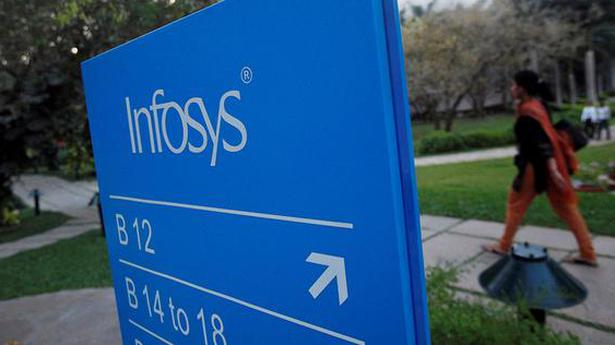 The COVID-19 pandemic has its footprints all over Infosys’s annual report of fiscal 2020 that was released on Saturday.

The economic slowdown or other factors affecting the economic health of the U.S., the U.K., the EU and Australia are expected to cast a gloom on the financials of the Indian IT services giant.

Infosys, on account of its revenues being concentrated in a few geographies, expects to see a serious impact. “In fiscal 2020, 61.5%, 24.1% and 11.8% of our revenues were derived from projects in North America, Europe and the rest of the world, respectively,” the report said.

In fiscal 2020, it derived 31.5% of its revenues from the financial services and insurance industry. “Instability and uneven growth in the global economy has had an adverse impact on the growth of the IT industry in the past and may continue to impact it in the future. This instability also impacts our business and results of operations and may continue to do so in the future,” the report added. If the economies of the U.S., U.K. or the EU weaken or growth remains uneven — including as a result of the uncertainty surrounding Brexit — Infosys believes its clients may reduce or postpone their technology spending significantly. This may, in turn, lower the demand for its services, negatively impacting its revenues and profitability.

Meanwhile, during the fiscal, its employee count rose 6.09% over the previous fiscal, the report said. Infosys had 2,42,371 employees, of which 228,449 were professionals, involved in service delivery to clients. During the previous year, it had grown over 11%.

During the year, Nandan M. Nilekani voluntarily chose not to receive any remuneration for his services rendered to the company.

The company’s past policy was to pay out up to 70% of the free cash flow of the corresponding financial year in such manner (including by way of dividend and / or share buyback) as may be decided by the Board from time to time. Effective from fiscal 2020, the company expects to return approximately 85% of the free cash flow cumulatively over a 5-year period through a combination of semi-annual dividends and/or share buyback and/or special dividends.