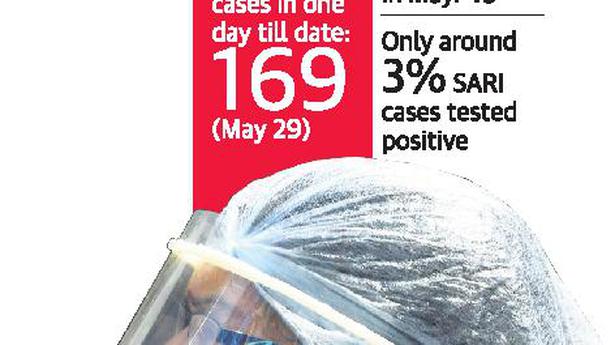 A comparison of COVID-19 cases in the State both before and after the four phases of lockdown indicates a massive spike in positive cases after the relaxation of norms.

A total of 2,425 cases are recorded in Telangana till May 29, and officials have segregated them into migrants, foreign evacuees and deportees. While 2,008 locals tested positive, 417 are from the other groups.

Cases up after May 8

Positive cases started to go up after May 8, and there was a massive rise in number of cases on a single day for the last 22 days.

It was published in these columns over a week ago that health officials are expecting a surge in cases as more number of people are moving out of their homes to offices, and other places. They are expecting a further rise in number of cases.

However, the surge is not as much as officials feared. Health officials took up various surveys to know if the high number of cases are reported from any locality. Auxiliary Nursing Midwives (ANM) and Accredited Social Health Activists (ASHA) conducted fever surveys to track the number of patients getting admitted to hospitals, and reasons for illness or admission were also recorded.

Besides, number of deaths and reasons behind them were surveyed too. People with Severe Acute Respiratory Infections (SARI) were tracked and tested. Director of Public Health G. Srinivasa Rao said that if there is a surge in any data from a particular locality, they would keep a close watch. If a high number of SARI cases are reported from a locality, surveillance will be increased there to check the spread of coronavirus.

Usually, around 900 people die in a day in the State due to various reasons. Dr. Rao said that deaths have gone down by 30% from March 22 to May 2.

“Everybody is taking good care of themselves and family members with co-morbidities,” he said.

Over 4,700 SARI cases were recorded in April and May, he said. Samples were collected from all of them for tests. Dr. Rao said that only 2.8-3% of them tested positive for coronavirus. Senior health officials said that this data indicates that the virus did not spread to the extent they have feared.