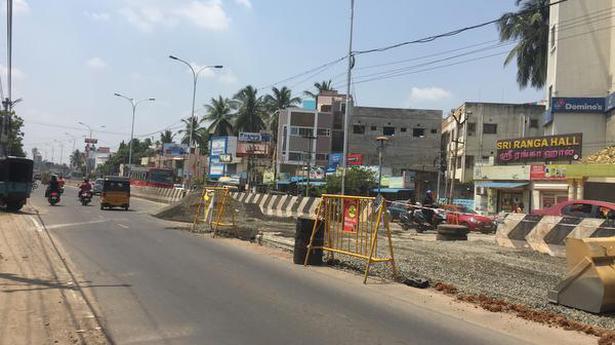 Constructed near Rakki theatre complex in Ambattur, this facility is expected to play a crucial role in checking inundation in nearby areas

The State Highways Department has expedited the construction of a culvert on Surapet Main Road, near Rakki theatre complex in Ambattur. Concrete roofing work undertaken recently provides evidence of this urgency.

The major monsoon-preparedness work began early this year following the widening of the existing stormwater drains. The culvert would play a crucial role in preventing inundation on that section.

Officials of the State Highways Department have pointed out that the new culvert being constructed to check inundation in areas around a section of Surapet Main Road with Rakki theatre complex at one end and the Oragadam junction (not to be confused with the Oragadam industrial hub) at the other end.

The new culvert will help excess rainwater in Oragadam get discharged to nearby streams that are connected to the Puzhal lake.

Surapet Main Road already has six culverts in Surapet and Puzhal as these neighbourhoods are located around Puzhal lake and get flooded during monsoon.

“The construction of a new culvert is a welcome measure as it will prevent inundation. However, the work should be completed before the onset of the northeast monsoon,” says K. Sarath from Ambattur.

As per estimates, the new culvert, built across the road, is 60 feet long and 10 feet wide and has a depth of 10 feet.

Oragadam junction is the key traffic point on the eight-kilometre-long Surapet Main Road, which connects Ambattur with Puzhal near the Central Prison. The junction is part of a short route to reach Anna Nagar and Tirumangalam from Ambattur, Mannurpet, Thirumullavoyal, J.J. Nagar and Maduravoyal.

Motorists coming from interior parts of Kallikuppam, Oragadam, Ambattur, Padi, Korattur, Nolambur, Anna Nagar West pass through this junction on their way to places like Maduravoyal, Porur and Tambaram via the Chennai Bypass Road.

Further, the junction provides a crucial link between the western parts of the city with the neighbouring districts including Kancheepuram and Thiruvallur via Chennai Bypass.

It also connects industrial belts in Sriperumbudur in Kancheepuram with the Kolkata Highway (NH:05) via Poonamallee High (PH) Road.

“The new culvert work will be completed by the end of October,” says an official of the State Highways Department.