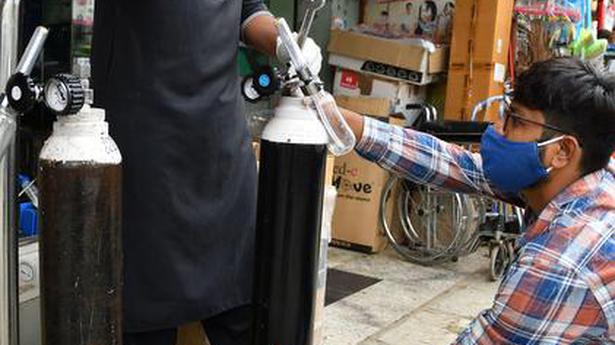 The recent crackdown on unlicensed supply of oxygen cylinders across Telangana may have exposed the black marketeers, but has also, once again, opened a demand-supply gap that social activists and NGOs were trying to fill.

Social activists had stepped in to facilitate supply of oxygen cylinders for emergency use by COVID-19 patients and suspects who were quarantined at home and unable to immediately get admitted to government hospitals, given that admission in State-run health facilities can be a notoriously slow process.

Then there were some others who had booked the cylinders in advance anticipating that the patient or suspect at home might develop respiratory problems.

However, the police department and Drug Control Administration (DCA) conducted inspections recently and nabbed a few persons for illegally hoarding oxygen cylinders. DCA officials found discrepancies at 14 cylinders distribution units and one manufacturing unit. They cited threat of explosion, need for medical supervision and permissions as reasons for the inspections. Doctors, too, advised against administering oxygen at home as a patient or suspect’s condition has to be assessed before deciding whether the person needs oxygen support through the cylinder or mechanical ventilator.

In view of the inspections and associated risks of using an oxygen cylinder without medical advice, social activists and NGOs can no longer be involved in the supply process.

The relative of a COVID patient explained that the reasons for booking or buying an oxygen cylinder are many — inordinate delay in admission at a government hospital, concerns over affordability in case of checking into a private hospital, being redirected from one hospital to another in search of a bed, etc.

“Family members of the patients or suspects suffering from shortness of breath used to request for oxygen cylinders until they found a hospital bed. We helped them in getting oxygen cylinders only under medical supervision. We have a team of doctors who review condition of the patient and advise the amount of oxygen that needs to be administered. In some cases, patients are suggested hospitalisation rather than home care by doctors. But there were a few others who were scared to get admitted to hospitals and requested for a cylinder at home. However, we stopped providing them help from Friday,” said Mujtaba Askari, trustee at Helping Hand Foundation.

K. Sai Teja, a social activist, said that they too had extended help in getting cylinders to people who experienced delay in getting admitted to government hospitals, but are no longer able to do so, leading to gaps in the healthcare delivery system. This could be resolved if patients or suspects are shifted from their home in ambulances and admitted to government hospitals without delay, he suggests.