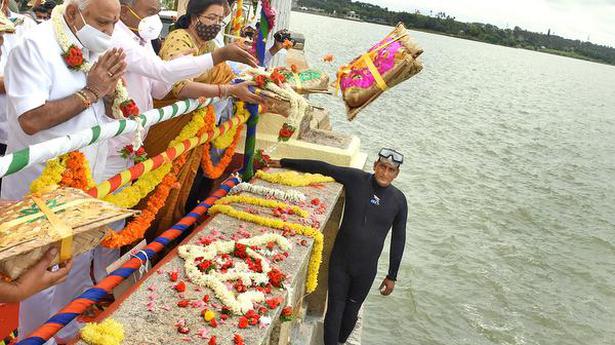 Clearing the cloud of uncertainty over Dasara celebrations this year amid COVID-19 pandemic, Chief Minister B.S. Yediyurappa on Friday said the festivities would remain simple this year.

After offering bagina at the Kabini reservoir in H.D. Kote taluk of Mysuru district, Mr. Yediyurappa told reporters that the government would discuss the matter and chalk out the modalities. He said the Dasara High-powered Committee would meet shortly in this regard.

Earlier, Mr. Yediyurappa offered the customary bagina to the Cauvery at the Krishnaraja Sagar in Mandya district.

Addressing reporters at the KRS, the Chief Minister said the reservoir had reached its full capacity on 36 occasions, including in the last three consecutive years, since it was built more than 80 years ago.

Expressing satisfaction over the filling up of all the reservoirs in the State, Mr. Yediyurappa said sowing had been by and large completed across the State and farmers could expect the harvest to be the best in the last 25 to 30 years.

He said the State government was pursuing the Mekedatu project, conceived to provide drinking water to urban areas of the State, and necessary steps had been taken to secure the Centre’s approval for its implementation.

Meanwhile, several farmers were taken into custody and released later when they were marching towards the Kabini dam to stage a black flag demonstration against the “anti-farmer” decisions of the government such as amendments to the Karnataka Land Reforms Act and the APMC Act.

The group of farmers, led by president of the Federation of State Farmers’ Associations Kurubur Shanthakumar, was stopped by the police near Shiramalli circle, leading to an altercation. The police said the farmers would not be allowed to go near the Chief Minister and meet him in view of the safety measures in place owing to COVID-19. The farmers were detained and taken away in a police vehicle.

Tight security was in place around the KRS and the police denied entry to activists of farmers’ organisations who were planning to protest against the Chief Minister.