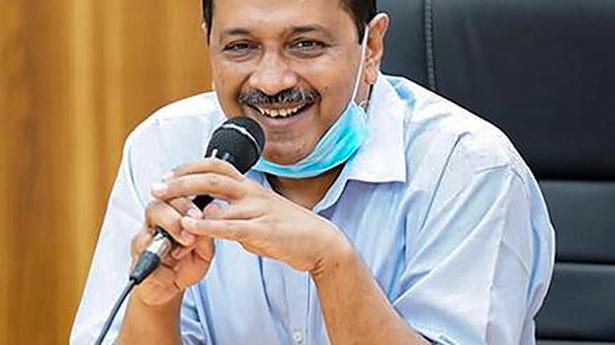 Chief Minister Arvind Kejriwal on Thursday launched an initiative — Red Light On, Gaadi Off — to tackle the problem of rising air pollution in the Capital.

Mr. Kejriwal said there are one crore vehicles registered in Delhi out of which if 10 lakh turn off their ignition at traffic signals, around 1.5 tonnes of PM10 will reduce in a year and PM 2.5 will decrease by 0.4 tonnes. The initiative has been launched under the “Yuddh, Pradushan Ke Viruddh” campaign of the government.

“The pollution here is increasing and the situation deteriorates every year due to stubble burning in the neighboring States. With time, the number of cases of stubble burning is increasing in neighboring States. I think the toxic air becomes a bit diluted when it reaches the Capital, but the farmers who burn the stubble are the worst hit,” he said at a digital briefing.

“From today, we are launching a new initiative. Every time vehicles stop at a red signal, we have noticed that drivers do not turn the engine off. This is known as idling when the vehicle emits a lot of toxic air. In Delhi, there are around one crore registered vehicles. Even if we estimate that around 30-40% of the vehicles come out in the streets of Delhi and cause emissions, we can imagine how polluting the air can get,” he added.

Experts had calculated and informed him that the initiative could lead to a decrease in PM 10 levels by 1.5 tonnes and PM 2.5 by 0.4 tonnes, he said. The experts noted that when a car is in idling mode, it emits a lot more pollutants than when traveling.

“If the car is in idling mode for 10 seconds, it emits more pollutants than if you stop the engine and then restart it. In this way, you can also save more fuel in your car. Every day, one car spends around 15 to 20 minutes at the red signal on an average. During this time one car utilizes around 200 mL of fuel. But if you switch off the engine at the red signals, you can save ₹7,000 per month,” he added.

Mr. Kejriwal said vehicular emissions in winters stay near the surface and contribute to the air pollution.