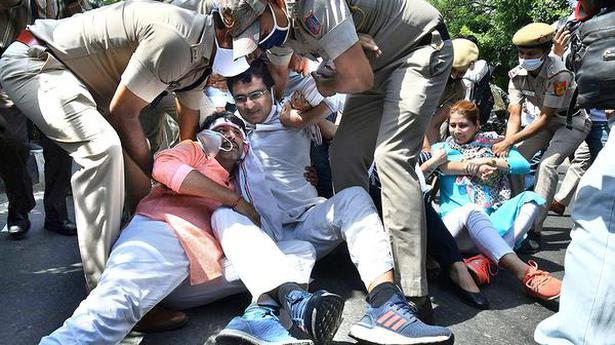 The Delhi Congress on Monday was scheduled to hold a “Kisan-Mazdoor Nyay March” to protest against the ‘anti-farmer’ Acts, passed by the Modi government, from Rajghat to Raj Niwas but its leaders and party workers were detained before they could begin their march.

The party alleged that the Delhi police used brutal force to roundup its workers and farmers who had gathered for the protest despite the crowd being peaceful and protesters following social distancing norms.

“The Congress workers and a large number of farmers who wanted to submit a memorandum to the Lt. Governor to be forwarded to the President of India demanding withdrawal/repeal of the anti-farmer Acts, were assembling at Rajghat, when at the behest of the Modi government, they were detained and taken to different police stations in the Capital,” the party said.

Delhi Congress chief Ch. Anil Kumar later submitted the memorandum to the Lt. Governor. He said that it was murder of democracy and violation of human rights as the Delhi police acted in a draconian manner to prevent the Congress workers and farmers from holding a peaceful march in support of the farmers in a land from where the iconic slogan “Jai Jawan, Jai Kisan” had resonated across the world.

“The Modi government seems determined to hand over the farm sector, too, to a handful of corporate companies by abolishing MSP, to deny the farmers just prices for their agricultural products,” Mr. Kumar said.

‘Told authorities many times for judicial panel to probe riots’