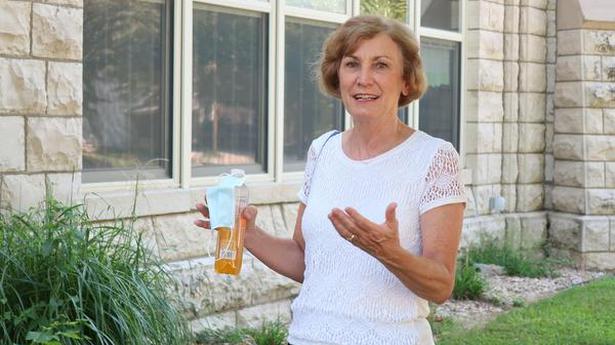 An audio clip in which Democrats’ candidate is heard praising strict Australian gun laws has been released by Republicans.

Republicans circulated a video of the Democrats’ candidate for an open U.S. Senate seat in Kansas praising strict Australian gun laws that she said “took them all away” to undercut her campaign as a political moderate in what’s been an unexpectedly tough red-state race for the GOP.

Ms. Bollier’s campaign on Sunday released longer audio from the same event that included moments in which Ms. Bollier said she supports the Second Amendment to the U.S. Constitution protecting gun rights and recalled hunting with her father.

The race appears to be close between Mr. Marshall, a two-term congressman for western and central Kansas, and Ms. Bollier, a Kansas City-area state senator who was a lifelong moderate Republican before switching parties late in 2018. As the GOP fights to keep its 53-47 majority in the Senate, Mr. Marshall and his supporters have attacked Ms. Bollier on issues that favour Republicans in much of the state, including gun rights.

Both a two-and-half-minute video clip provided to The Associated Press by the Marshall campaign and the longer audio from Bollier’s show that she noted that an adult daughter lives in Australia and praised a law there that in the 1990s forced owners of 700,000 guns to sell them to the government as “this amazing thing.”

“They have no guns. They don’t allow them. They just took them all away,” Ms. Bollier told her audience. “And you know what? It’s pretty darn safe.” Ms. Bollier also noted that Australia imposes licensing and training requirements for gun owners. Kansas law allows adults to carry weapons openly, and it allows them to carry concealed firearms without a permit — a policy Ms. Bollier opposed a legislator when it was enacted in 2015.

“Who thinks you can just go out and have gun? Seriously,” Ms. Bollier said. “You can’t drive a car without training. You can’t basically do anything with some kind of training. This is a lethal weapon.”

As the video clip began circulating, Ms. Bollier tweeted on Sunday afternoon: “I do not support gun confiscation. I never have. I never will.”

Republicans have not lost a Senate race in Kansas since 1932, but Ms. Bollier has flooded the airwaves with ads that have included testimonials from former GOP state lawmakers.

The race had seen a Kansas record of $32 million in advertising as of last week, with Mr. Marshall and his allies being outspent, according to the media advertising firm Advertising Analytics.

Ms. Bollier’s campaign had spent more than $9 million, with outside groups paying for about $8 million more. Nearly 90% of the roughly $14.5 million in ads for Mr. Marshall were covered by outside groups, with the Marshall campaign spending about $1.5 million, according to Advertising Analytics.

He later provided a link to a longer video clip with Ms. Bollier’s full answer to a question from a woman who said she recently bought a handgun and was “completely disturbed by how easy it was for her one to buy one and carry it concealed.”

“This may sound good to Bollier’s donors in San Francisco, but to Kansans, this is disqualifying,” Mr. Pahls said in a later text. “Even among Democrats, forced gun confiscation is an alarming concept.”

‘Taken out of context’

Ms. Bollier said she still has one of her father’s shotguns but called gun violence a public health crisis.

“Roger Marshall and his allies in Washington want to take Barbara’s comments completely out of context for their political benefit,” Ms. De Luca said in a statement. “She knows we can protect the rights of gun owns and keep our communities safe.”

But Mr. Pahls suggested that Ms. Bollier’s comments in support of the Second Amendment represent “carefully scripted talking points and that with off-script answers to questions, “she exposes herself for the radical leftist that she is.”

“Her true colours started shining through,” he said.

Mr. Pahls also suggested Ms. Bollier’s staff ended the event shortly afterward because “she got off her rehearsed talking points.”

Ms. De Luca called it “an outright lie,” then provided 32 minutes of audio from the event. It showed that she began wrapping up about a minute later — after answering a final question and saying she supports background checks for gun purchases.

Map controversy: It was distorted because of technical reasons, says Nepal

Monarchy | The Ramas of Thailand