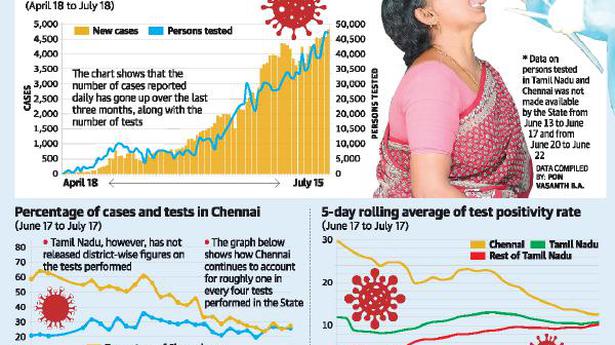 Tamil Nadu has increased the number of RT-PCR tests performed for COVID-19 with more than 47,000 persons now being tested daily.

This is a significant increase from the roughly 40,000 tests in the second week of July. Tamil Nadu overtook Maharashtra in the total number of tests a few weeks ago, and now leads the country. This has been aided by the ramping up of capacity, with the State now having 111 laboratories approved by the ICMR to perform RT-PCR tests.

However, the number appears to be concentrated in Chennai, which accounts for roughly 25% of the tests daily. With the State not releasing district-wise testing figures, it is unclear how equally spread they are. For instance, of the 47,539 persons tested on Friday, 12,259 were from Chennai. The other 36 districts accounted for 35,280 tests with an average of 980 tests each. While districts around Chennai and places like Madurai have increased the number of tests, with a high number of cases being reported, it is possible that some districts are testing way below this average.

Rafale vendors yet to confirm technology transfer under offsets: CAG

Husband, wife all set to be elevated as Madras High Court judges