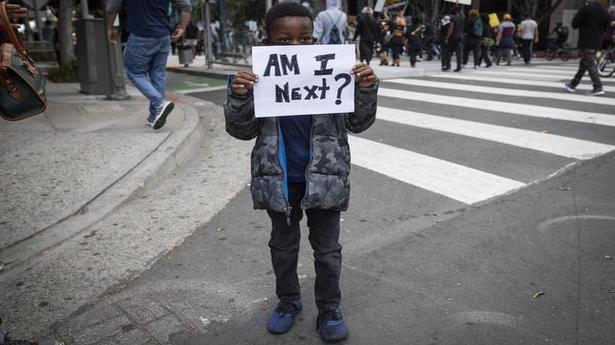 Imagine if it was a non-western country. Days of violent protests across its cities; tear gas shells and rubber bullets used to disperse the crowd; and pitched battles between protesters and guards outside the presidential palace. Imagine if it was a non-western President, who called the protesters “thugs”, threatened to shoot them and used the country’s military against them, and posed for a photo in front of a worshipping place, holding a religious text aloft, after clearing the peaceful protesters using force. The U.S. State Department would have immediately condemned the government, and called for respecting human rights. The British Foreign Office would do the same, almost robotically. So would France and Germany. The U.S. Congress might even legislate against the ‘rogue’ regime. Sanctions could follow. But this time, the country that witnesses violent protests, police brutalities and presidential threats is none other than the United States of America.

Watch | What is happening in Minneapolis?

The protests that erupted after the death of George Floyd, an unarmed black man, under the knee of a white police officer in Minneapolis, Minnesota, have spread like wildfire across the big cities of the country, reminiscent of the protests that followed the assassination of Dr. Martin Luther King Jr. in April 1968. Despite President Donald Trump’s threats, the heavy use of force by the police and calls for calm by several State-level and local leaders, protests and looting continued for six straight nights. While the immediate trigger was Floyd’s killing, what came out through the “riots” was the pent-up anger of thousands of Americans, who are fighting many odds at the same time.

The year 1968 was one of the most tumultuous years in modern American history. Vietnam protests were already under way. On April 4, Dr. King was assassinated at a motel in Memphis, Tennessee. Two months later, presidential candidate Robert F. Kennedy was shot and killed in Los Angeles. The assassination of Dr. King had triggered violent protests across American cities, which are called “the Holy Week Uprising”. Washington DC, Chicago, Baltimore, Kansas City all saw violent unrest, mostly by black youth, in the intensity that had hardly been seen since the Civil War years. Dozens were killed. Thousands were injured.

There are parallels between 1968 and 2020. Before Flyod’s death, the U.S. was already reeling under massive economic and healthcare crises. The black community was disproportionately hit hard by the COVID-19 pandemic, which has claimed more than 100,000 American lives so far. The country is also witnessing the sharpest economic downturn since the Great Depression. Floyd’s death lit the fuse, and Mr. Trump played an arsonist.

America had seen race-related violence several times in the past. In 1992, Los Angeles saw a series of riots after four police officers who were on trial for the use of excessive force in the arrest and beating of Rodney King were acquitted. In 2014, the fatal shooting of Michael Brown, an 18-year-old black boy, triggered violent protests in Ferguson, Missouri. Those uprisings were also violent, but largely localised. What’s happening now, like what happened in 1968, is “an American uprising”, as what called by David Remnick, the New Yorker editor. Beneath this uprising lies a divided country struggling to cope with the triple challenges of a deadly infection, joblessness and worsening race relations.

In 1968, President Lyndon B. Johnson had deployed the National Guard to suppress the protests. But he had also written to Congress, the very next day of Dr. King’s assassination, to pass the Fair Housing Act, one of the lasting demands of the slain civil rights hero. Within five days, the Civil Rights Act of 1968, Title VIII of which is known as the Fair Housing Act, passed the House of Representatives by a wide margin. Compare that with the way President Trump is handling the situation today. His response is increasingly militaristic, which has so far provoked the protesters, deepening the divisions in society. Mr. Trump has clearly taken the cue from Richard Nixon’s playbook. In 1968, after the protests, the Nixon campaign called for ‘law and order’–a racially coded message that amplified the fears of the white majority about violence by black protesters. The ‘law and order’ campaign breathed a fresh life into the political fortunes of Nixon, whom Johnson had once called a “chronic campaigner”. Nixon won the presidency that year hands down.

Mr. Trump can’t bet on the economy for his re-election any more. The economy is in free-fall. Amid rising violence and civil disturbance, it’s evident that the Trump campaign is pivoting to Nixon. A White House spokesperson on Monday called for ‘law and order”. Later in the day, President Trump, after threatening to quell protests by using the military, said, “I am your President of law and order”. But there is one big difference. When Nixon launched the campaign targeting the protesters, he was not the President. Here, Trump is the man in the White House, and American cities are burning under his watch.