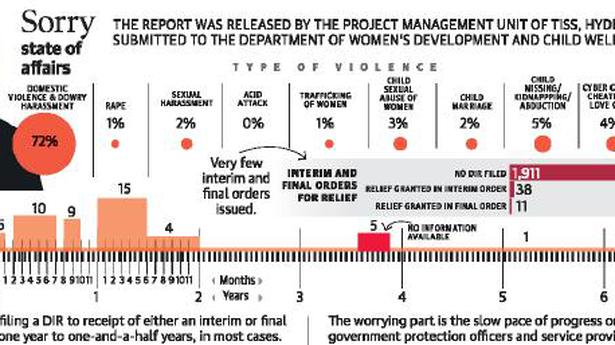 Domestic violence and dowry harassment continue to constitute the largest percentage of complaints registered with the Sakhi One Stop Centres (OSCs) in the State during 2019-20.

Out of a total of 8,410 cases registered with the OSCs in 33 districts, 5,703 pertained to domestic violence and 384 to dowry related harassment.

The two categories accounting for 72% of the total number of complaints form the largest category under gender-based violence, according to the annual report on Sakhi OSCs in Telangana.

The highest number of cases were registered in Medchal-Malkajgiri (1,183) followed by Rangareddy (894) and Hyderabad (614), pointing to a large concentration of cases in urban clusters.

The report was released by the Project Management Unit (PMU) of the Tata Institute of Social Sciences (TISS), Hyderabad, and submitted to the Department of Women’s Development and Child Welfare (DWDCW) in April.

The DWDCW appointed School of Gender Studies at TISS in the city as its knowledge partner for setting up, monitoring and evaluating OSCs, in association with selected NGOs in districts in 2017.

The worrying part however, the report says, is the slow pace of progress on Domestic Incident Reports (DIR) filed by government protection officers, and service providers in courts. Very few interim and final orders were issued.

The PMU of TISS did an analysis of these DIRs filed in different districts to understand delays and plug loopholes by bringing them to the notice of courts.

The analysis showed that the duration from filing a DIR to receipt of either an interim or final order is about one year to one-and-a-half years, in most cases.

Out of 1,911 DIRs filed, orders have been received in 49 cases only and final orders in 15 out of the 49 cases. “This shows a poor response rate and supports the argument that they need to be fast tracked to provide justice to survivors,” the report stated.

The categories of relief sought by survivors show that except for child custody, they had opted for all other categories such as protection, residence, maintenance and compensation in more or less equal measure. Dowry related violence found the highest mention in types of violence in the DIRs.

Again, the number of DIRs registered was highest in RR district, indicating the urban concentric trend.

The report also recommended that police facilitation officers and Home Guards were, at present, appointed only in a few districts.

The District Legal Services Authority should strive to refer domestic violence cases to Fast Track courts, given the long pendency.

The District Medical and Health department (DMH) should make a designated gynaecologist and psychiatrist available and linked to Sakhi OSCs.

Finally, the report recommended that the district administration should ensure better coordination between the district welfare officer, concerned NGO running the OSC, and OSC centre administrator.

Shelter homes should be provided for the destitute or mentally ill, HIV/AIDS and TB patients and economic rehabilitation centres for destitute women.