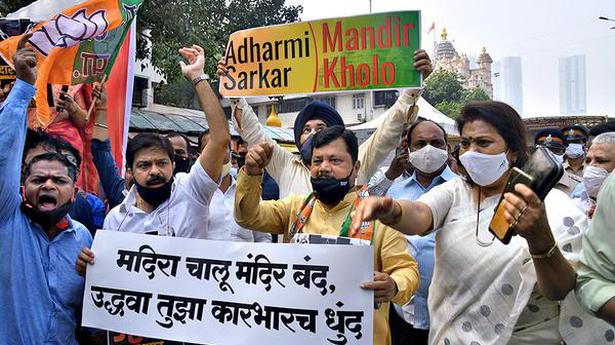 The Bharatiya Janata Party (BJP) on Tuesday held a Statewide agitation demanding the reopening of temples across Maharashtra.

BJP State president Chandrakant Patil said the Maha Vikas Aghadi government should not test the patience of saints, priests and devotees. He said, “The government must immediately reopen temples and other places of worship. Don’t wait for the situation to arise where all these people will forcefully barge into temples.”

Mr. Patil said it is beyond understanding that at a time when businesses are reopening, the government is reluctant to reopen temples.

The Thane unit of the party led by MLAs Niranjan Davkhare and Sanjay Kelkar rang bells as part of a “ghanta naad” protest in front of Ghantali temple, while BJP workers led by party MLA Atul Save performed a puja and sang bhajans outside Gajanan Maharaj temple in Aurangabad city.

“The government didn’t give a single rupee to these people. Hence, we want to make the government aware of these facts,” Mr. Save said.

Tushar Bhosle, leader of the BJP’s spiritual wing, said though the Centre has given the go-ahead, the State government is only allowing bars to open, but not temples. “Last month, we organised a ‘ghanta naad’ agitation, but the government cannot hear and see us,” Mr. Bhosle said.

Actor Kangana Ranaut, who had a tiff with the Shiv Sena and the State government after she compared Mumbai to Pakistan-occupied Kashmir, welcomed Governor Bhagat Singh Koshyari’s letter to the CM, calling for the reopening of temples. She tweeted, “Nice to know Gunda government is being questioned by Honourable Governor sir, Gundas have opened bars and restaurants but strategically keeping temples shut. Sonia Sena is behaving worse than Babur Sena.”