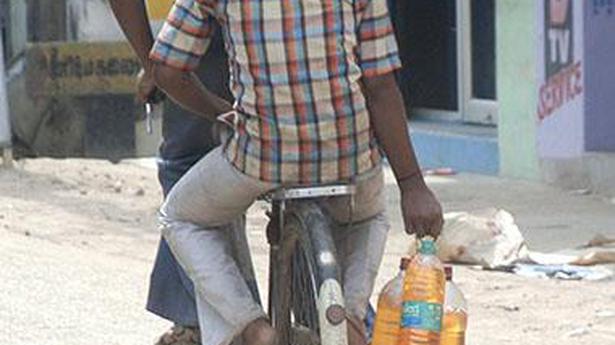 Door-to-door delivery of diesel, an initiative of national oil marketing companies to rope in startups for catering to customers whose fuel requirement is large at a location of their choice, is set to gain momentum.

“We will be coming out with an advertisement this month for all the interested startups to empanel,” says R. Sravan S. Rao, Executive Director and head of Indian Oil Corporation (IOC) for Telangana and Andhra Pradesh.

The call for expression of interest is aimed at taking the programme, beyond the pilot projects launched since 2018 in a few cities, to many locations across the country, including a few in the Telugu States.

Doorstep delivery of diesel by the oil marketing companies namely IOC, Bharat Petroleum Corporation and Hindustan Petroleum Corporation, is targeted at a few user industries such as telecom, construction and mining or specifically telecom towers, earth moving equipment and heavy machineries. While bus and trucks operators are high-volume customers, the programme is for those who cannot come to the outlets or operating at remote locations.

The doorstep delivery is also meant to cater to shopping malls and commercial establishments that require diesel for their generators. The idea is to avoid the trouble for such customers of purchasing fuel in barrels and storing the same at the site. Many of them also lack facilities to store.

Making doorstep deliveries happen will be bowsers or mobile dispensers mounted on trucks for the purpose. According to Mr. Rao, the bowser will be automated, secured with e-locking and the movement of the truck monitored on a real time basis. Under the e-locking mechanism, the dispenser lock can be operated only within the geo-fenced area and with a one-time password received by the customer.

While the oil companies will facilitate diesel supplies, from their terminals, depots or the company-owned, company-operated outlets, to the startups, the latter will have to invest on the bowser, reach out the potential customers and market the product. The revenue for the startups will be by way of a facilitation fee that they will collect from the customers.

Under the pilot projects, doorstep delivery both by retail outlets of the oil companies as well as by the startups has been under way at few locations. Sources say in Telangana, it is under way at a couple of places. The proposed roll-out in more cities is to be undertaken only with start-ups as part of engaging with new entrepreneurs in innovative business solutions.

IOC recently said it wants to join hands with “relevant startups engaged in the business and is shortly commencing process of their enrolment”.

Existing dealers desirous of participating can do so through a separate entity. But for now, there is opposition to the programme with leaders of trade voicing concerns about more competition, even as the retail outlet network is also being expanded, apart from possible misuse and the need for adhering to safety aspects.