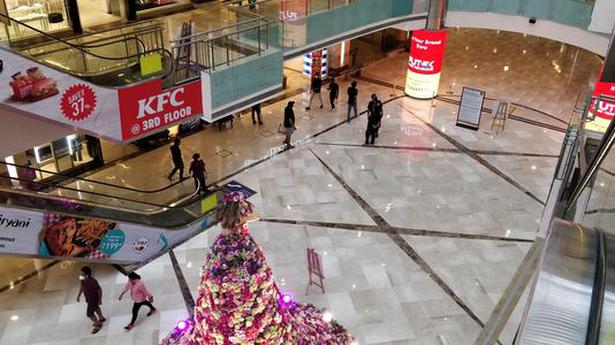 It has been nearly three weeks since malls in the Millennium City were allowed to reopen, but visitors are staying away due to apprehension over getting infected, and many stores are not reopening due to the double whammy of low demand and high rent.

Several shuttered stores greet visitors at MGF Metropolitan Mall, which used to be one of the busiest shopping centres on the Mehrauli-Gurugram Road before the lockdown in March.

An attendant at a footwear kiosk said he is yet to sell a pair since they reopened.

Many shops at the mall are closed due to dispute over high or outstanding rent. A few brands have decided to wind up their business altogether as they were not expecting much demand.

“A couple of well-known brands dealing in luggage and kitchenware have wound up their business entirely and hence closed their shops in this mall too,” said Mr. Bajaj.

The shopkeepers in the mall, said to be among the most successful in the city, have been seeking reduction in rent till the time business improves. In some cases, however, this request has led to disputes and shutting down of shops.

Many store owners in other malls, however, have considered lowering the rent for at least six months.

The manager of a gifts and greeting cards shop in MGF Metropolitan Mall said business has plunged to “nil” and tenants are finding it difficult to sustain themselves due to high rent. “The owners must consider reducing the rent for at least six months. Many of them, however, are adamant on collecting full rent for the months during the lockdown,” the manager said.

Many clothing brands in Ambience Mall have also closed, finding it difficult to sustain themselves due to fall in demand and inability to pay rent.

“A shop selling Kashmiri shawls and carpets, and a clothing store, have shut on this floor,” said Mohammad Ahmed, assistant manager of a clothing store. “Footfall is around 20% of normal and sales have dipped sharply,” he added.

Nitin, a bookshop manager, said the number of average daily customers has fallen from 70-100 to just 5-10. “Sales have dipped as kids below 10 are not allowed inside the mall… meanwhile, erratic transport has delayed fresh stock, which has further hit business,” he added.

Store owners in several malls said they expect footfall to remain low till the time theatres and restaurants with bars are allowed to reopen. “When a family steps out on a weekend, they look for a complete package: a movie, good food and entertainment for children,” said Mr. Ahmed.

Chief security officer of Ambience Mall, Major Ajit Singh (retd.), said the restriction on entry of kids, elderly and pregnant women has hit footfall. On an average weekend before the lockdown, the mall used to see 60,000-70,000 visitors. When the mall reopened, it saw only 6,000-7,000 shoppers over the weekend — just 10% of normal.

In an attempt to stay afloat in such a tough situation, many store owners have started offering home delivery, virtual tour on WhatsApp, and attractive discount offers. Many are advertising online while others are calling up regular customers to inform them that stores are now open.

“We have been offering 50% off on fresh stock to lure customers. The mall management has asked store owners to facilitate virtual tour of the shop on WhatsApp to reach out to the customers at home,” said Shyam Kannujia, assistant store manager of a shoe shop at Ambience Mall. “This week, the store saw an average of 44 customers… we used to see at least 150 people before the lockdown,” he added. Three of the 11 store employees were told to go on leave without pay to cut costs.

Many shops have not called back their workers who travelled to their home Sates.

Focus on the positive

Amid the gloom, Mr. Bajaj has decided to focus on the positive. “Footfall has increased since the day malls reopened… the numbers will go up further in the coming days,” he said, adding that local markets had opened two months earlier and had till now been taking care of the demands of shoppers.

“But the customers will return to the malls soon. There is talk of theatres opening soon, though there is no confirmation. If the multiplexes open, the footfall will increase,” said Mr. Bajaj.

Many, however, believe that the situation is unlikely to improve till the end of this year.