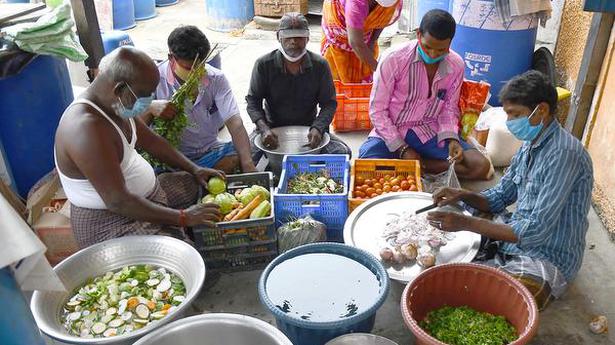 At Kannagi Nagar, an autorickshaw driver spearheads an initiative to provide needy residents with free food

Autorickshaw driver V. Balasubramani has joined hands with a clutch of other residents at Tamil Nadu Slum Clearance Board (TNSCB) tenements in Kannagai Nagar to provide free food to the needy.

The group is engaged in this charity work since April. They prepare, pack and distribute the food to those at the tenements who need it.

Balasubramani sustains this initiative by ensuring that donations flow in via well-wishers.

“Some support our cause by offering money and some others by providing food grains and groceries. We start cooking at 7 a.m., we finish it by 12 noon. We mainly prepare sambar rice, tamarind rice, and tomato rice. Once a week, we make vegetable biriyani. In fact, we would like to provide our people with coconut rice and curd rice but these items eat too much into our budget. With that money, we will able to feed a few more mouths. Mostly, the elderly come and receive the food packets. Where differently-abled residents are concerned, we go and hand over the packets to them. We cater to around 450 people,” says Balasubramani.

The team that Balsubramani spearheads includes B. Ravi, a cook, and K. Ansaribhai, a van driver; and D. Kamalakannan, Rajini, Venakatesan and Ezhumalai, all of them daily-wage workers.

There is a trend of autodrivers taking up temporary work such as selling vegetables, sometimes from modified autos, to deal with the current situation. Asked why he didn’t take that route, Balasubramani says, “This service that I do takes care of my family’s requirements as well. Had I taken up some other job, it would have benefited only my family.”

The shopkeepers from whom the team buys vegetables and groceries support the initiative by offering a discount.

“The person who rents out the utensils charges us less than his usual rate. Every morning, one of us collects the utensils and return them after the cooking is done. We can’t keep the vessels in our houses for want of space,” says Balasubramani who lives with his wife and three children.

His parents; and his two brothers and two sisters, all younger to him, live in another flat at the same tenement. One of his sisters is a person with special needs.

On Independence Day, Balasubramani and his team started cooking early, at 3 a.m., and by 8 a.m., they were through with it. They added kesari to the regular menu.

“Every year, we hoist the national flag and celebrate Independence Day, and so we wanted to finish the cooking early. This year, we honoured conservancy workers residing in our tenement, around 60 of them. We gave them towels that we had received from vendors for free. We had provided food to the vendors, and the towels were their token of gratitude,” he says.

During the 2015 Chennai floods, Balasubramani ran a similar food distribution service. While that initiative ran for 10 days, this one is stretching on for onths.

Those who may want to support Balasubramani’s cause by providing groceries can contact him at 84284 27952.