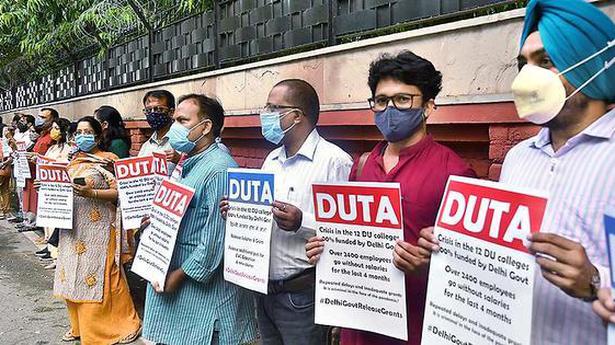 Teachers of Delhi University formed a human chain to protest the non-payment of salaries and pensions to staff of 12 colleges fully funded by the Delhi government, at Mandi House on Friday.

The crisis of inadequate grants in all the 28 Delhi government-funded and aided colleges of DU has persisted for over a year due to the tussle between the university administration and the Delhi government over the issue of formation of governing bodies, the group noted.

The insensitive attitude of the Delhi government towards the employees of these colleges has compelled the DUTA to continue its agitation, it said. It also hit out at Deputy Chief Minister over “sweeping charges of corruption” made by him recently and questioned as to why retired employees were being victimised.

The inordinate delay in release of adequate grants was causing severe hardships to the staffers, it said. Terming the government’s present stance “callous abdication of its responsibility”, DUTA demanded it to resolve the issue responsibly.