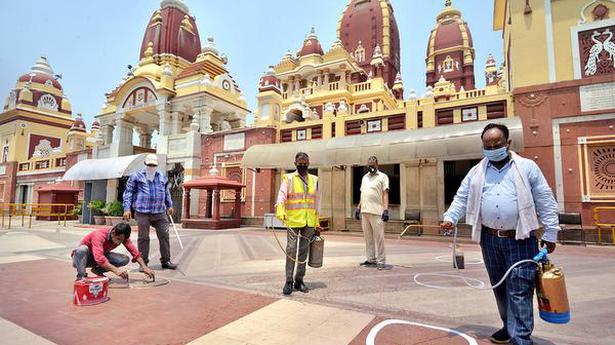 Restaurants, temples and Palika Bazar market at Connaught Place opened on Monday after nearly two and a half months of lockdown. Most sites took precautions to ensure social distancing, screening and sanitsation, but saw scant footfall.

While most consumers visited markets for essential needs, others came kill time or make videos to share on social media.

Rakesh Lal came to Wenger’s in CP all the way from Gurugram. “I had been coming to the store every month for the last 30 years. During the lockdown, the store was not delivering to Haryana,” said Mr. Lal as he waited in a queue outside the shop.

Several popular eateries that had been offering home delivery during the lockdown, opened up their dining halls.

At Cafe Coffee Day in CP, the store manager was handing out roses to customers — after spraying sanitiser and thermal screening. “We have had only two sets of customers all day,” said Raeez, the manager. “We would be lucky if we had any more. But if they came we will seat them leaving one table apart,” he added.

At most fast-food restaurants, markings had been made on the floor to ensure customers observe social distancing. Some of the staff also wore full safety gear while other employees dispensed sanitiser.

At the entrance to Palika Bazar underground market, there were two queues: one for people being thermal screened and another for those who had been refused entry as their body temperatures was deemed too high.

“It is so sunny, the machine is just catching that. I will wait in the shade for a while and it will be okay,” said Junaid who had come to get his phone fixed.

Inside, traders worried that customers would not want to visit the market as the central air conditioning had been turned off following government guidelines. Prateek Goyal, who had come to take stock of his garments store, said that business activities could not go on as before and some system of stores opening on alternative days would have to be set up. “We are also worried about falling sick, but what can we do? Work has to go on,” he added.

The primary concern for most traders was paying rent to the New Delhi Municipal Council. Asserting that the only reason businesses were being allowed to open was because the government’s own coffers were running dry, Darshan Kakkar, president of the market association, said that authorities must provide relief.

“I am ready to either give up my business or to give up my life,” said Meher Elahi, another member of the association appealing for authorities to provide relief.

The Hanuman Temple near CP has installed a sanitisation tunnel, and there are markings on the ground to ensure social distancing.

Following government guidelines, prasad offerings have been disallowed and the bells have been covered up with cloth to stop worshipers from ringing them. As a special initiative, a man dressed as Hanuman was deployed inside the temple, to dance to the beat of drums.

Among those who visited Connaught Place were people with very specific purposes such as those visiting branded mobile centres for repairs, purchasing specific sets of clothes or to fulfill a craving. Apart from the focussed customers were multiple couples, sitting on benches trying to steal a moment alone, and others who had arrived to shoot videos.

Shinu, a student from Balgarh in Haryana, commuted for nearly 90 minutes with his four friends and two models to shoot Tik-Tok videos.

“We shoot prank videos,” said a member of the troupe.

Unclear as to what the prank was going to be, the group was seen moving around CP trying to find a good location to shoot. Others took pictures posing in front of the market’s iconic white pillars. All were without masks, to ensure the shot was not compromised.

Pandemic to keep Asia’s growth at lowest since 1967, warns World...