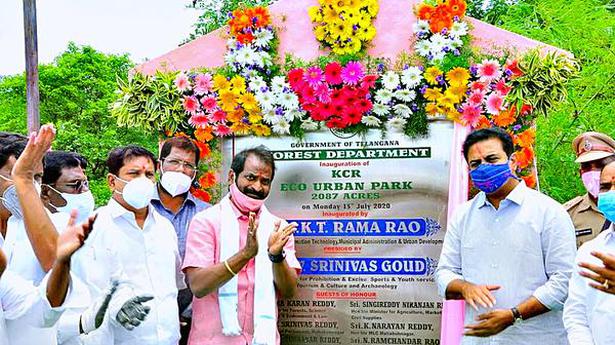 Country’s largest eco-park, as claimed by the State government, spread over 2,087 acres land near Mahabubnagar was inaugurated by Minister for Urban Development, IT and Industries K.T. Rama Rao on Monday. He also inaugurated a Government Medical College established with ₹450 crore.

Developed as Mayuri Urban Eco-Park, it was renamed as KCR Eco-Park on the occasion.

Speaking after inaugurating the park along with Ministers V. Srinivas Goud (Excise) and E. Rajender (Health), Mr. Rama Rao said Palamuru was known as the most backward area in the State once but after formation of Telangana, it transformed into a progressive district with the increased irrigation facilities.

He stated that the government is committed to complete Palamuru-Rangareddy lift irrigation project in spite of obstructions being created by forces inimical to the State’s interests. He suggested the district administration to develop facilities in the eco-park so as to attract visitors from Hyderabad and other parts of the State too.

Later, speaking after inaugurating the medical college, the minister said the maternal and infant mortality rate in the State had come down considerably after the implementation of KCR kit scheme by increasing the institutional deliveries, particularly in the government hospitals. He also mentioned about Kanti Velugu programme, stating that it was the world’s biggest eye testing programme.

On the State’s response to Covid, he alleged that the Opposition parties were trying to project it as a major failure of the government as if it was controlled better elsewhere in the country, including in the States under their rule. He stated that recovery rate of Covid patients was 98% in the State and only 2% fatalities were being reported, that too due to co-morbidities.

Health Minister Mr. Rajender said the medical college in Mahabubnagar was completed in a record time and it was the first medical college sanctioned in government sector after formation of Telangana. The district was known only for its migratory workers but now it was among the progress States with the increased irrigation facilities.

He further stated that four medical colleges were sanctioned after formation of the State and the Government Medical College and Hospital at Mahabubnagar would provide medical care to the needy on par with private hospitals. A 100-bedded ward for Covid treatment along with testing facility would also be made functional soon, he said.

The district administration has taken up plantation of 5 lakh saplings/seedlings on the occasion of Mr. Rama Rao’s visit to the district.