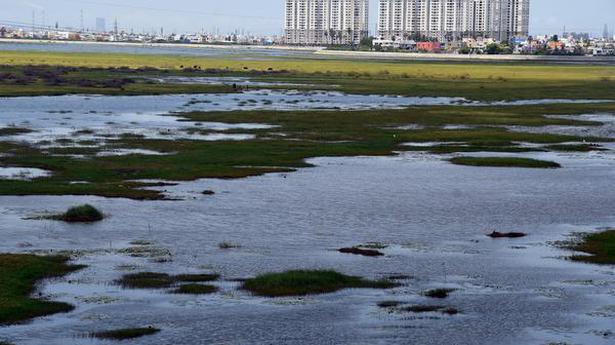 Various measures are being taken up to improve the western suburbs of Chennai, ahead of the northeast monsoon. However, tackling fresh encroachments in the water bodies despite repeated evictions often proves to be a challenge for Water Resources Department.

The department had demarcated the Korattur lake’s boundary and had also put up announcement board that the site belonged to the WRD last month. “But we found that the board put up in the retrieved portion of the lake was damaged during our inspection recently. We have lodged a complaint with the Ambattur Estate police to take action against those who damaged the board as an attempt to encroach the water body,” said an official.

Several voluntary organisations and government agencies have joined with the WRD to rejuvenate the lake. The recent one was to improve the green cover along with GST and Central Excise (Appeals-II) Commissionerate and a volunteer team of Alliance Orchid Springs apartments coordinated by Sneha Srinivasan, officials said.

Similarly, the department removed a shop that had encroached into the Ayappakkam lake area near Ambattur on Saturday. Officials noted that the notice was already served to shop owner to vacate the site. The department demolished the structure as the owner failed to vacate. Bunds would be formed to prevent further encroachments in the lake.

Residents and activists in Korattur want stringent measures to be put in place to prevent further encroachments. Earlier this month, the WRD had started work to repair and remove weeds from various surplus courses to ensure free flow of flood water into the water bodies near Chennai and Tiruvallur district.

Besides stocking materials for flood prevention, inlet channel of Kakkalur lake, surplus channels of water bodies in Putlur, Sothupakkam and Amoor are also being repaired as part of the monsoon preparedness work. There are also plans to repair the breached portions of bund of eight-km stretch of Kosasthalaiyar river between Karanodai bridge and Vannipakkam checkdam.

Work is on progress to clear vegetation in Ambattur and Korattur lakes and their inlet and surplus channels. “We plan to complete the works by this month-end,” an official said.