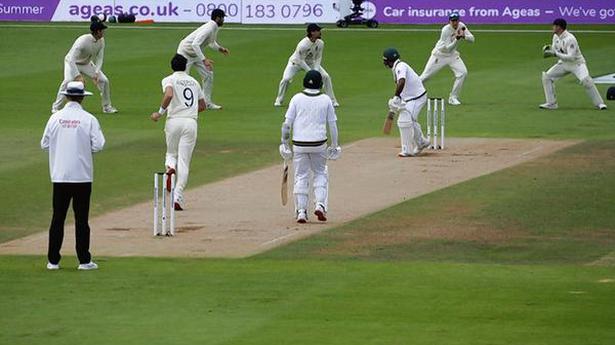 James Anderson’s bid to become just the fourth bowler to take 600 Test wickets was hampered by yet another dropped catch on Monday as poor weather frustrated England in the series finale against Pakistan.

Anderson, who started the fourth day’s play in the third Test with 598 wickets, induced an edge from Shan Masood but wicketkeeper Jos Buttler floored a routine chance.

It was the fourth dropped catch in 37 balls off Anderson and the closest either he, or England, came to a wicket in the session in Southampton.

Pakistan was 41 for no loss after being made to follow on when rain stopped play and the players took an early lunch. Masood was on 13 and Abid Ali on 22, with Pakistan still 269 runs adrift of England’s mammoth first innings total of 583 for eight declared.

A huge downpour during the interval then threatened to keep the players off the field for several hours.

With more rain forecast for Tuesday and no certainty as to when England will next play a Test due to the coronavirus pandemic, Anderson could be left stranded on 598 Test wickets for some time yet.