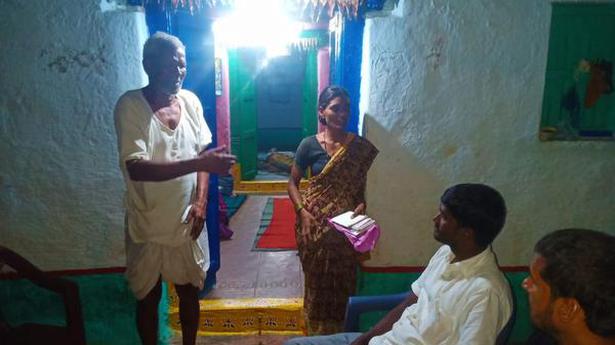 Collection of details in the morning, confirmation of facts during the night.

That is the system adopted by Hunwada mandal authorities in Mahabubnagar district to execute the task of enumerating details of properties for updating records in Dharani portal. Three days ago, when the teams of village panchayat secretary and multi-purpose workers turned up at the villages in the morning, not many people were available at their homes.

“Majority of the villagers are going to crop field works in the mornings. This made our job of collecting information difficult,” Hunwada Mandal Parishad Development Officer (MPDO) Natraj said. The work of collecting details of properties cannot be postponed. After racking up their brains on the way forward, they decided to knock the doors of the villagers in the evening even if it meant disturbing them after backbreaking work in the fields. This helped them in two ways. The teams began visiting the houses in the morning and collecting details of all properties with the persons available there. Later, in the evenings they are going back to the houses for confirmation of the facts and figures they had collected in the morning. This also instilled an element of trust in the villagers.

“Since each fact has to be cross-checked, sometimes the work was going till late in the night. At the end, it is yielding positive results,” the MPDO said. There are nearly 12,600 households spread over 35 gram panchayats in the mandal. So far they could contact 2,600 households and verify details of different properties.

In Vepuru village of the mandal, located 110 km away from State capital, there are 971 households. Already, information of 205 of them was gathered and cross-checked with the members of the families during interactions in the night. Along with the multi-purpose workers, even youngsters in the villages were coming forward voluntarily to assist them in ascertaining facts, the MPDO said.

He too is going around the villages to oversee progress of the work during the nights. Mahbubnagar district Collector S. Venkat Rao hopes, at this pace, enumeration of properties would be completed on time.

‘EC to Kaleshwaram in violation of law’

‘NGT verdict unlikely to have impact on first-phase Kaleshwaram works’