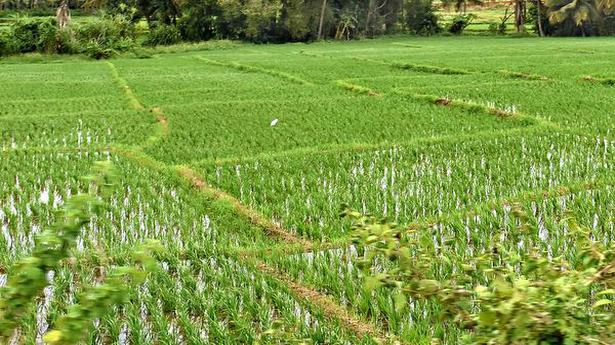 Excessive rains across most parts of the State during this year’s South West monsoon are now set to retreat. Meanwhile, the pandemic has not affected agricultural activity if the sowing status is any indication, as per the reports of the Karnataka State Natural Disaster Monitoring Centre (KSNDMC)

The sowing target for kharif was 73 lakh hectares against which the actual coverage as of September 30, 2020, was 77.5 lakh hectares. This is more than the actual area covered during the corresponding period last year when 68.84 hectares was brought under sowing, KSNDMC’s statistics reveal.

North Interior Karnataka comprising 12 districts brought 50.69 lakh hectares under sowing against a target of 46.81 lakh hectares and achieved 108% of the actual target, as per KSNDMC statistics.

Meanwhile, continuing rains in parts of South Interior Karnataka attributed to the low pressure area over the Bay of Bengal, are expected to persist for a few days but will not have any negative impact on standing crops.

Local authorities said paddy was the only major standing crop in the region and the current spell of rains will not affect as it was still in the growth stage.

The Joint Director of Agriculture in Mysuru, Mahanteshappa, said over 1 lakh hectares of land have been brought under paddy cultivation in Mysuru district and the current spell of rains will not affect the crops at this stage. But blast disease or Benki Roga can afflict the crops though it can be managed by the farmers.

But in parts of Malenadu, heavy rains concentrated for a few days and lashed the region in August. This may affect paddy, maize and tobacco production, although the negative impact will be marginal.