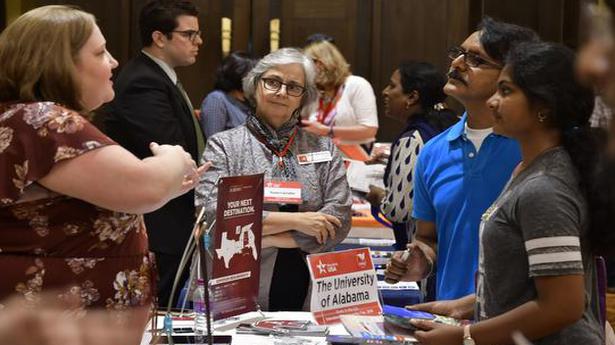 Foreign students in the U.S., including thousands of Indians, are left facing the possibility of falling out of valid immigration status following a Department of Homeland Security rule on attending online classes. Indian officials will raise the issue with their U.S. counterparts on Tuesday during Foreign Office Consultations, a high-ranking Indian official told The Hindu.

The rule, announced by the Immigration and Customs Enforcement (ICE), an agency within the US Department of Homeland Security (DHS), says those F-1 and M-1 (non-academic and vocational students) visa holders planning to take online classes only will not be allowed to remain in the U.S. Due to COVID-19, a number of universities are planning to shift all their classes online for the fall semester, which normally starts in September.

Also read: The Hindu Explains | How will the U.S. visa ban impact India?

The issue would “definitely” be raised at Tuesday’s talks, the official told The Hindu.

With at least 2,00,000 Indian students in the U.S., the country is the second larger source of foreign students, China being the first. The announcement comes weeks after U.S. President Donald Trump suspended H1-B highly skilled worker visas through the end of the year. Most of these visas go to Indian citizens each year.

“Nonimmigrant F-1 and M-1 students attending schools operating entirely online may not take a full online course load and remain in the United States,” the ICE statement said. Those whose colleges and universities were moving to an online only model would therefore have to leave the country or find another way to stay in status.

“Active students currently in the United States enrolled in such programs must depart the country or take other measures, such as transferring to a school with in-person instruction to remain in lawful status. If not, they may face immigration consequences including, but not limited to, the initiation of removal proceedings,” ICE said.

This difficult situation for students is exacerbated by the unprecedented disruption to international travel.

“They can try to switch to visitor status if they cannot get onto a flight, but that is not a great solution as visitor status is short term and there is no guarantee that it will be approved,” Cyrus Mehta, an immigration attorney, told The Hindu.

A temporary exemption for the spring and summer semesters, allowing foreign students to take more online classes than the rules normally permit, would not be extended to the fall semester. Normally F-1 students are allowed to take one class or three credit hours online.

Students outside the U.S. who plan to take all courses online in the fall would not be permitted entry into the country, the ICE said. The State Department would not issue visas to students who were going to be taking all their classes online due to the pandemic.

“This is a wildly horrible idea in the middle of a global pandemic,” Ellie Murray, a professor of epidemiology at Boston University, said on Twitter.

“While the justification of the administration is that they are doing this to comply with a regulation that does not allow students in F-1 status to be in online classes, they can easily amend the regulation during this unprecedented pandemic,” Mr. Mehta said.

President of Harvard University Lawrence Bacow criticized the ICE’s announcement and its “ one-size-fits-all approach to a complex problem” , as per the Harvard Crimson. Harvard had announced that it would allow only 40% of its students on campus in the fall.