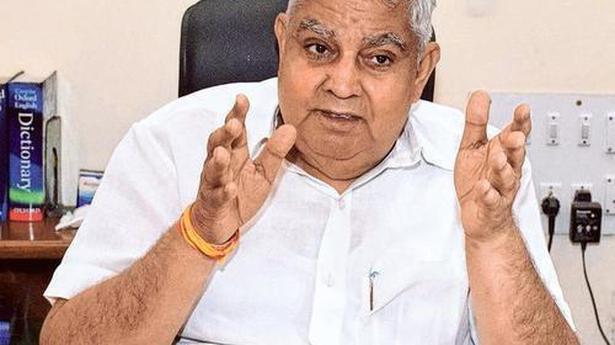 “Due to inactions and failures @ Mamataofficial farmers in WB have so far been deprived of ₹8,400 crore benefit #PMKisan Most unfortunate that Annadata is so ill-treated. Farmers all over have benefited by [₹]92,000 crore but no benefit to WB due to government failure,” Mr. Dhankhar tweeted sharing the letter addressed to the Chief Minister.

The developments came a day after Prime Minister Narendra Modi released the sixth instalment of the PM-Kisan scheme. “It is indeed distressing to note that in our State 70 lakh famers continue to be denied the benefit. They have already lost ₹8,400 crore benefit which was their due and right,” Mr. Dhankhar wrote in the letter.

Pointing out that every farmer in the country has so far received ₹12,000 — totalling ₹92,000 crore — under the scheme, the Governor blamed the “insensitivity and confrontational stance of the State government” for it.

Mr. Dhankhar said the State was only required to identify the farmer families for the benefit.

Describing the development as “cruel joke and historic injustice”, the Governor said he fails to “understand why this has not been done by the State government. This is unfortunate lapse, painfully harmful to the interest of the farmers”.

Union Home Minister Amit Shah in a virtual rally in June also flagged the issue and said the Centre was willing to transfer money in 24 hours, provided the State furnishes a list of beneficiaries.

The Trinamool Congress government maintains that it has a separate scheme for cash transfers to farmers. The Mamata Banerjee government had launched a Krishi Krishak Bandhu scheme in 2019 to offer an investment support of ₹5,000 to every farmer per acre in two instalments for either the rabi or the kharif crops during a year. The State government has also released funds for farmers whose crops were damaged after cyclone Amphan.