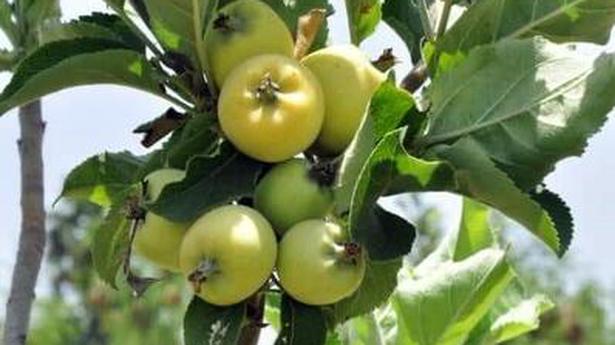 A new chapter unfolded in the horticulture cultivation of the district with a progressive farmer Yeleti Limba Reddy being successful in the experimental farming of apple which is unknown to the State hitherto.

The Hariman-99 variety developed by Hariman Sharma of Pannaiyan village in Bilaspur district in Himachal Pradesh planted by Limba Reddy on 2 acres some one year four months ago in Venchiryal village in Mupkal mandal came to fruition now. However, the crop is not used for consumption for the first two years, and from third year onwards, it can be marketed for commercial purposes.

Mr. Reddy, who has expertise in horticulture cultivation for 30 years, come to know of the Hariman-99 variety through YouTube. The variety can withstand hot weather and can be raised in plains. Mr. Reddy consulted Mr. Hariman Sharma and sent a cheque for the plants and got 500 saplings through a courier service.

He is the second farmer from Telangan to have gone for apple farming. Two years before him, a tribal farmer, Balaji, raised the crop in Adilabad. However, he planted only 15 saplings. Mr. Balaji also raised a few plants at Rashtrapathi Nilayam at Bollaram in Hyderabad and was honoured by the President.

The longevity of Hariman variety plant is a maximum of 40 years and gives 40 kg crop every year in the initial years. Seven eight years later, 100 kg crop can be harvested from each tree. Thus, even in the worst condition, ₹7 lakh to ₹8 lakh can be earned on each acre, said Mr. Reddy. “Apple orchard needs watering from time to time and I am growing it in organic method. Flowering starts in January and crop can be reaped in June or July,” he said .

Minister for Roads and Buildings V. Prashanth Reddy, who visited the orchard on Thursday, appreciated Mr. Reddy for his initiative.