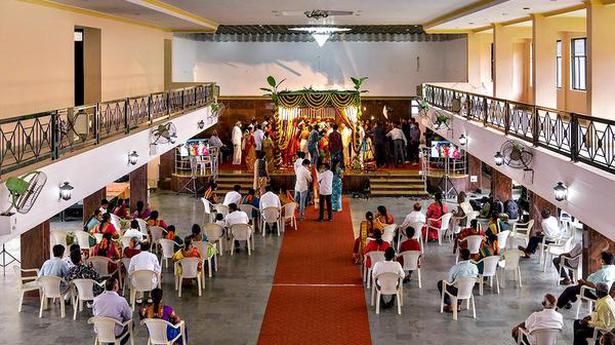 The system of simple marriages, which has become the order of the day amid COVID-19 pandemic, has been hailed by farmers’ leaders and agriculture experts. They feel it should continue to be the norm in rural areas even after the lockdown is lifted to prevent farmers from the burden of loans.

The Karnataka State Sugarcane Growers’ Association has decided to take up a campaign soon after the lockdown is lifted to create awareness among farmers about the need for keeping marriages simple in the interest of their financial health even post-lockdown. The association wants to hold seminars and discussions at the grass-roots level to promote the concept of simple marriage.

President of the association Kurubur Shanthakumar observes that grand marriages are one of the main reasons for farming families migrating to cities in search of small jobs after abandoning farming. “Lavish marriages push farmers into so much financial and social distress that they not only borrow heavily to meet the expenses, but also end up selling their farmland when they are unable to payback loans. After losing their farmland partially or completely, the farming families migrate to urban areas in search of jobs to earn their livelihood,” said Mr. Shanthakumar.

“All the farmers’ organisations have been striving to promote simple marriages for a long time. But now, we should take it up aggressively,” he said, and suggests that the government should not hesitate imposing penalty or punishment if there are too many guests at any wedding even after the lockdown is lifted.

‘It gives me more time for farming’

Though many farming families had reservations over simple weddings in the initial phase of the lockdown, they now appear to be adapting themselves to the change and are happy with the fact that it saves time and money.

C.T. Nuthan, an young and educated farmer from Chikkamarali village in Mandya district, whose wedding is scheduled for the second week of June, said he is very proud that his wedding is going to be a simple affair. “It is a fantastic system. About 2,000 people would have attended our marriage if it was held in a grand manner during normal times. But now, it will be held in a nearby temple and confined to only 50 people as per the government’s restrictions,” he said.

“In the earlier system, we needed at least a month for preparations. Now, we need just a day’s preparation as marriage is going to be a ceremony of just a few hours. This saves a lot of time which I can invest on farming. It saves the time of hundreds of people as they too would have to attend the wedding,” he said.