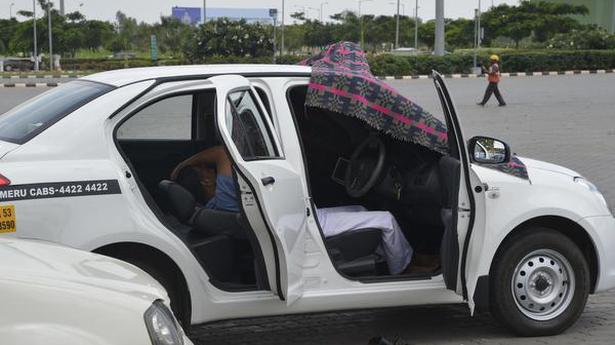 Manjunath, a resident of Laggere, bought a car two years ago and tied up with an aggregator. All was well until the COVID-19 outbreak.

“I pay an EMI close to ₹15,000. Since April, there have been no earnings. In addition, fuel prices have increased and maintenance of the vehicle is not easy. To lessen the financial burden, I have no option but to sell the vehicle. For six years, I depended on the taxi business to look after my family, but now I have to look for some other profession,” he said.

Unable to bear the financial distress induced by the pandemic, many taxi owners in the city are selling their vehicles. They say after the outbreak of COVID-19, their earnings have dropped drastically, and the majority of the taxis, including those catering to tourists and corporate bodies, remained off the road for months.

Taxi owners allege that both the State and Central governments have not come to their aid. Major demands, such as waiver of road tax by the State Transport Department, waiving of interest on EMI and extending loan moratorium, remain unfulfilled.

Radhakrishna Holla, president, Karnataka State Travel Operators Association, said, “Despite knowing the suffering of taxi owners and drivers, authorities concerned are not coming to our aid. We are not in a position to take out the vehicles without any bookings. How can the owners pay the EMI and taxes without any income? Fleet operators too are selling their vehicles to lessen the financial burden.”

Owners say people in neighbouring States, such as Andhra Pradesh, are buying the cars. After buying, some use them for their personal needs after paying tax in their respective States.

“Though the nationwide lockdown was imposed in the last week of March, the transport sector felt the heat of the pandemic much before that. Movement of international passengers, especially in the corporate sector, and tourists had come down in January. We see no hope in revival of business in the near future. Those who were operating taxis for the corporate sector are also suffering huge losses as companies have asked their employees to work from home,” said Mr. Holla.

Somashekar K., president of Namma Chalakara Trade Union, said, “For a taxi that has more seating capacity, one needs to pay ₹5,000 as tax per quarter. There are other expenses too. For how long can one park a vehicle? It is nothing but a dead investment. Many owners also fear depreciation in value of the vehicle if it remains idle for months. The State government miserably failed in attending to the grievances of owners and drivers. The promises to pay compensation to drivers are futile as thousands of applicants have not received the amount even after several months.”

Mr. Somshekar said that owners are using online modes, including social media, to sell their vehicles. “The number of people posting messages on model, year of purchase and price to sell vehicles has increased in the last couple of weeks,” he added.

Transport Commissioner N. Shivakumar told The Hindu that a proposal has been sent to the State government to defer payment of road tax till September.

The department had received 2.45 applications seeking compensation. The State government had estimated that more than seven lakh drivers would seek compensation, but due to tough riders, many drivers could not apply.