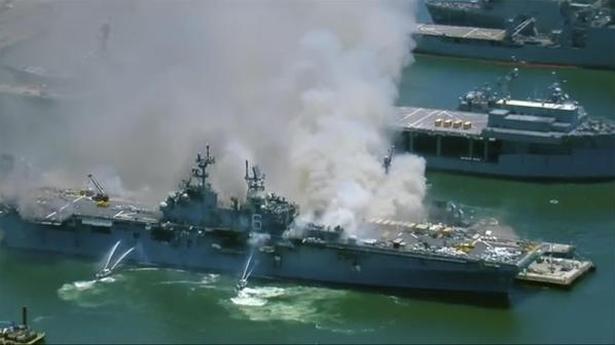 Flames raged for hours aboard a U.S. warship docked at Naval Base San Diego on Sunday, prompting an evacuation of the vessel and sending 21 people to the hospital with minor injuries, Navy and local fire officials said.

The San Diego Fire-Rescue Department reported an explosion in conjunction with the three-alarm blaze, which broke out at about 8:30 a.m. local time aboard the USS Bonhomme Richard, an amphibious assault vessel in port for routine maintenance.

Palls of thick, acrid smoke visible for miles engulfed much of the 257 meter warship for several hours, as about half a dozen firefighting boats in the harbor trained streams of water onto the burning vessel.

Seventeen sailors and four civilians were taken to a local hospital for treatment of non-life-threatening injuries, and all those who were aboard the warship — about 160 personnel — have been accounted for, the Navy said in a statement. The Navy earlier said 18 crew members had been hurt.


Around noon local time, the San Diego fire department said all of its personnel had been directed to exit the pier, while aerial footage showed the blaze appearing to grow in size.

Two guided-missile destroyers docked nearby — the USS Fitzgerald and USS Russell — were moved to piers farther from the burning vessel within the next 90 minutes, the Navy said in a statement. Smoke from the fire appeared to begin dying around 3 p.m. local time.

San Diego-based Navy spokesman Mike Raney said the precise origin and cause of the blaze had yet to be determined, but there was no immediate evidence of foul play. Munitions carried aboard warships are typically offloaded before the vessels enter port for maintenance as a security precaution, he told Reuters.

The fire broke out below the water-line of the ship, making it more difficult to bring under control, and likely spread to the vessel’s fuel systems, according to a civilian contractor on the scene who spoke to Reuters on condition of anonymity. 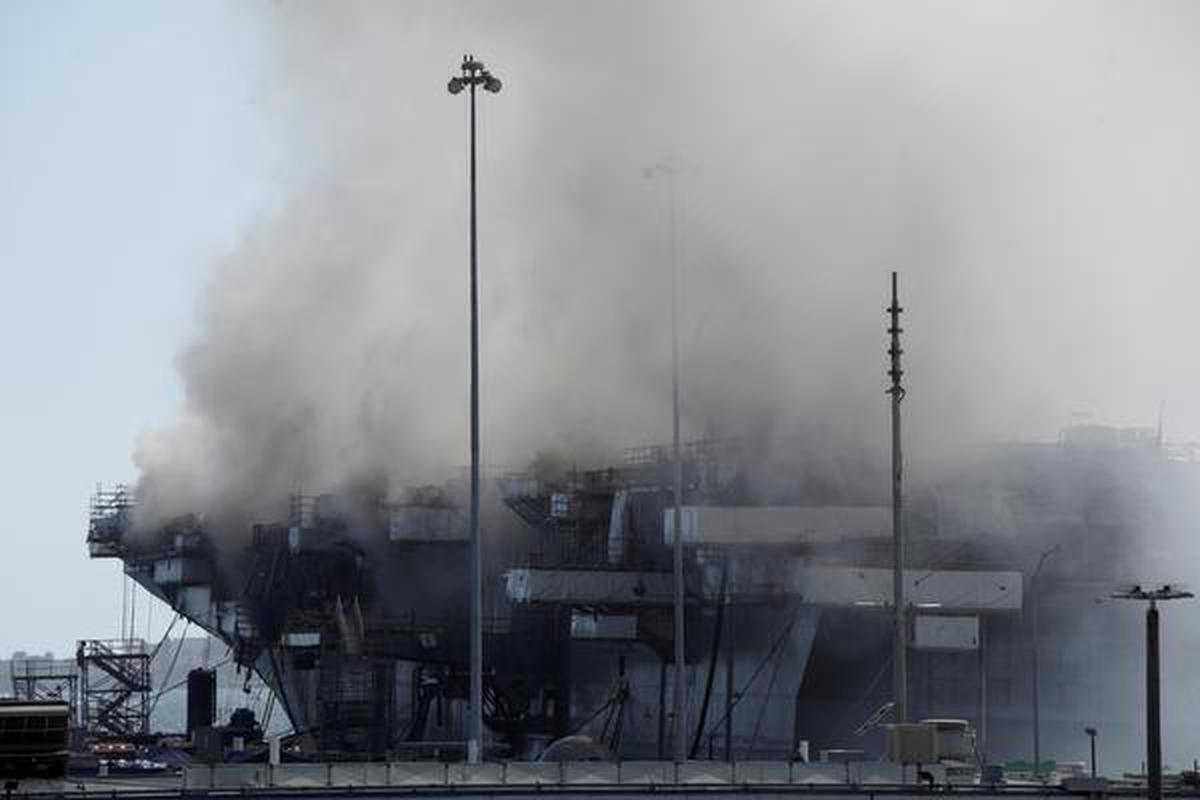 
The Bonhomme Richard, commissioned in 1998, is designed to carry U.S. Marine Corps attack helicopters and ground troops into battle. As a Wasp-class amphibious assault ship, it ranks as the second-largest vessel type in the Navy’s fleet, surpassed only by aircraft carriers.

The stricken vessel has participated in several military operations over the years and also has appeared in a pair of Hollywood films — the 2012 sci-fi action movie “Battleship,” starring Liam Neeson and singer Rihanna, and “Act of Valor,” which featured active-duty U.S. Navy SEALs, according to San Diego television station KGTV, an ABC News affiliate.

The ship was named in honor of Benjamin Franklin, one of America’s founding fathers and author of the influential “Poor Richard’s Almanack,” which he wrote under the pseudonym Poor Richard or Richard Saunders. It became a forerunner of the popular “Old Farmer’s Almanac.”