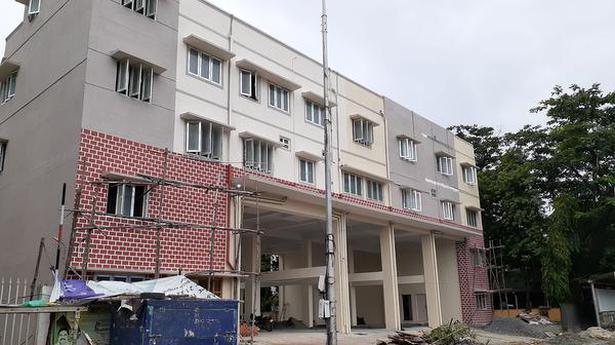 Expected to be completed in January 2021, the new facility will serve as the headquarters of the Chennai South Division of Tamil Nadu Fire & Rescue Services

A small room on Anna Main Road in Ashok Nagar that has been serving as a Tamil Nadu Fire & Rescue Services (TNFRS) station since 1979, is giving way to a multi-storey building. The new TNFRS station building, expected to be ready by January 2021, is of considerbaly larger dimesnions. But its significance derives from more than just its imposing size and facilities. The new building will serve as the headquarters of the Chennai South Division of the Department.

Of the four divisions — North, South, Central and Suburban — Chennai South has the most number of fire stations. There are nine of them, including stations in Mylapore, Raj Bhavan, Thiruvanmiyur, T. Nagar, Saidapet and Tambaram.

The Public Works Department (PWD) began the construction of this facility in May 2018 when the State government gave its nod for the project.

“It is almost ready except for a few works including flooring, plastering and painting. The station will coordinate with other fire stations especially those south of the city on rescue work,” says a TNFRS official.

As per the plan, the new building will have a host of facilities including separate cabins for station officers, firemen, a resting room for firemen and a conference hall.

The one-room structure that is being replaced is dilapidated, and has always offered only a bare minimum of amenities.

More importantly, the new facility will also have separate offices for the District Fire Officer (DFO – South), the Assistant Director (AD) and other senior officers of the Department.

Officials in the department said that among other features a specialised section known as Wings Department will be accommodated in the new building. The role of the Wings Department largely has to do with creating awareness campaigns about fire safety and rescue operations.

These campaigns are carried out in schools, colleges and public places by this department on a regular basis. Further, the Ashok Nagar Fire station office will get a skylift that can extend up to a height of 54 metres. At present, such skylifts are available only in select fire stations including the ones in Teynampet, Guindy, Tambaram, Raj Bhavan,Thiruvanmiyur and Egmore within the city limits.