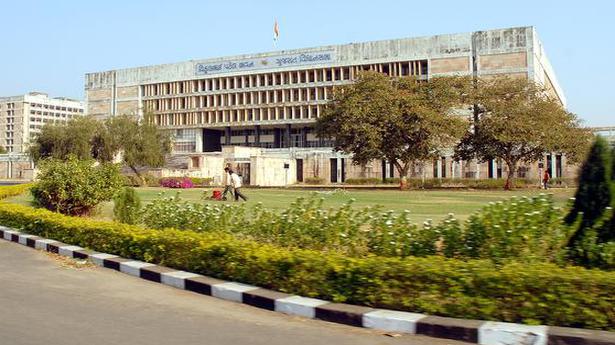 Five former Congress MLAs from Gujarat, out of the total eight who had resigned as legislators in March and June- ahead of the Rajya Sabha elections- joined the BJP on Saturday.

Of these five former MLAs, Mr. Patel, Mr. Merja and Mr. Chaudhary had resigned as legislators earlier this month, soon after the Election Commission announced June 19 as the new date for the Rajya Sabha election in the state.

Mr. Kakadiya and Mr. Jadeja had resigned as MLAs in March.

As per the earlier schedule, the Rajya Sabha election in Gujarat was supposed to be held on March 26. However, it was postponed due to the coronavirus-induced nationwide lockdown.

Welcoming the five MLAs’ decision to join the BJP, Mr. Vaghani said that their presence would strengthen the party at the local level.

He also expressed confidence that the BJP would win the bye-elections to the constituencies, which have fallen vacant due to their resignations.

He said that the MLAs quit the Congress due to internal factionalism and lack of leadership in the opposition party at the state as well as the national level.

“Congress MLAs have resigned and joined the BJP in Gujarat not once but several times in the past. If Congress continues to blame the BJP despite this happening repeatedly, then I would ask that party to shut its shop in Gujarat,” he said.

“Congress lacks leadership and is beset with internal factionalism. The party itself is responsible for the resignations of its MLAs,” he said.

Three other former MLAs, who had resigned from the Congress in March, are Soma Patel, Pravin Maru, and Mangal Gavit.

Mr. Vaghani said that these three former MLAs were also welcome to join the BJP.

The resignation of the Congress MLAs ahead of last week’s Rajya Sabha election for four seats was crucial for the ruling BJP to win three seats, leaving only one seat for the Congress which had fielded two candidates and hoped to win both the seats.

Three BJP candidates and a Congress nominee were elected in the election to the Upper House of Parliament from Gujarat.

The party, which won 77 seats in the 2017 Assembly elections, has been reduced to 65 seats after 12 MLAs resigned over the years, many of whom joined the ruling BJP.