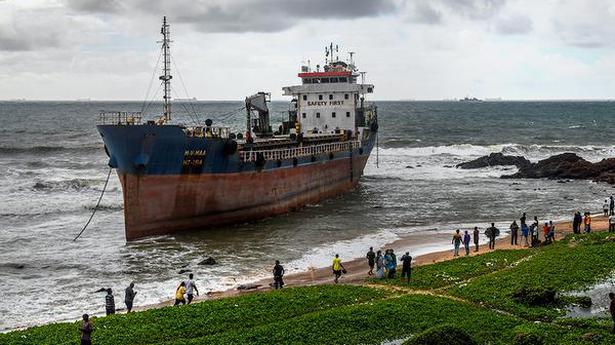 The coastal districts of Visakhapatnam, East Godavari, West Godavari and Krishna were battered by incessant rain, as the deep depression crossed the coast in the early hours of Tuesday at Kakinada.

At least five persons were killed in three districts due to rain and flood-related incidents.

A woman and her and daughter in Visakhapatnam and a man in Krishna district died due to landslides. In East Godavari’s Bommuru village near Rajahmundry, one person died due to wall collapse and in Visakhapatnam, a woman died after being swept away in a car in a stream.

The deep depression crossed the coast between 6.30 a.m. and 7.30 a.m. at a speed of around 65 kmph. This caused extremely heavy rains, registering over 204.4 mm rainfall in 26 mandals of East Godavari, eight mandals of West Godavari, seven mandals of Visakhpatnam and one mandal of Krishna district in 24 hours ending Tuesday morning.

As many as 146 mandals in the State witnessed heavy rainfall while 278 witnessed moderate rainfall.

Several areas were inundated to the heavy rainfall and also increasing flood in Godavari and Krishna rivers. In Visakhpatnam, 40 villages in 10 mandals were affected and 350 houses were inundated due to the rains. About 3,700 persons in vulnerable areas were evacuated and moved to seven relief centres. In East Godavari nearly 1,000 people were moved to relief centres.

National Disaster Response Force personnel rescued three persons, Sk. Yakub, Sk. Jansaid and D. Ashok, who got struck in Pedda Vagu stream near Chenagapdu of Nandigama mandal in Krishna while they were crossing a road across the stream. Officials said that the trio got trapped in the stream as the water level increased suddenly.

Meanwhile, all the major reservoirs in the State are full to their maximum capacity.