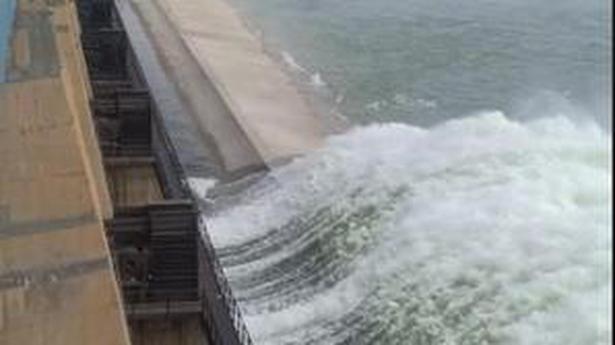 In a development that would augur well for the farming community of the two Telugu States by improving the chances of early arrival of flood into the common reservoirs, Srisailam and Nagarjunasagar, Karnataka has started release of water from Narayanpur dam in Yadgir district to the Krishna river course on Sunday morning, almost a fortnight earlier than last year.

According to the flood monitoring officials, the dam authorities of Narayanpur lifted two crest gates of the project for one metre each on Sunday morning to let about 11,250 cusecs of water into the river course as the flood cushion of the reservoir had come down below 4 tmc ft water. Storage of the reservoir crossed 33.5 tmc ft against its capacity of 37.6 tmc ft and the authorities decided to let water into the river course as nearly 40,000 cusecs of inflows were reaching it.

The inflows into Narayanpur were mainly from 35,000 cusecs released from Almatti after power generation and supplementation from the rivulets in between the two reservoirs. According to the Central Water Commission (CWC) forecast, the inflows into Almatti stood at about 56,500 cusecs on Sunday afternoon and the water storage reached 98 tmc ft against its capacity of 129.7 tmc ft. However, the CWC indicated that there would be a decline in the inflows by Monday morning.

Engineers of the Jurala project, however, stated that the flood being released from Narayanpur would reach Jurala only if it was not stopped at Gugal and Girjapur barrages. “At the rate of 50,000 cusecs release from Narayanpur, the water will reach Jurala in 48 hours as it has to travel about 180 km of the river course. Since the release of flood is low, it will take longer to reach Jurala, even if it is not stopped in the barrages between,” a flood monitoring engineer said.

Storage of water in Jurala was a little over 8 tmc ft against its capacity of 9.66 tmc ft on Sunday evening as the inflows from the local catchment area were only about 4,000 cusecs. About 1,500 cusecs was being drawn from the reservoirs for canals to fill tanks and other/drinking needs.