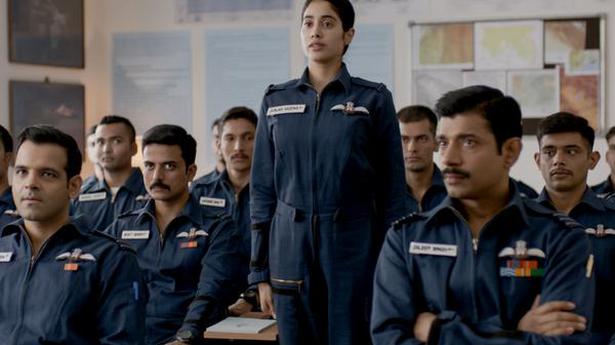 
If there was a class on the classic three-act structure, Gunjan Saxena: The Kargil Girl would be an apt specimen to dissect. It’s neatly, and almost clinically, separated into three portions: the formative years, the struggle phase, and the resolution. All three parts have a distinct purpose to serve, and none try to overreach or are too ambitious in the way they are filmed or narrated. The events are firmly sequential and the outcome is satisfying, if not exhilarating.

The first part chronicles the unwavering, unexpected and unconventional support of Saxena’s father, played by Pankaj Tripathi. He helps her realise her dream of becoming a pilot and work towards it from a young age. We see Saxena as a little girl enamoured by the cockpit of a commercial aircraft. She grows up to crack the entrance for the Indian Air Force, even though her motivation to be air-bound are not driven by nationalistic fervour.

This portion of the film has a light and humorous tone to it, and establishes her intent well, even if it is at times simplistic and clichéd, like the party scene where a teenage Saxena yells out her plans of quitting college to become a pilot.

Elements like a song from Kuch Kuch Hota Hain playing at a wedding, are nice touches to the ’80s and ’90s mise-en-scène that the film recreates. But the sonorous and intensely pulsating sounds of a war scene and imposing images of flying jets are lost, as the film finds a direct-to-digital release during the COVID-19 pandemic. Had this been a theatrical release, as intended earlier, the experience perhaps would have been elevated in the cinemas.

The misogyny and sexism Saxena faces at the Udhampur airbase, which her older brother (Angad Bedi) had cautioned her against, takes up the second act entirely. Prima facie, the scenes of Saxena struggling with the lack of a changing room and washroom for women are reminiscent of Hidden Figures, a film about black women scientists in NASA. But the similarity is perhaps just evocative of the same glass ceilings women have to break world over, irrespective of geography, culture and profession.


Kapoor’s natural restraint works as an asset in this act, as she navigates microaggression, outright slurs and exclusion from the boys’ club with calmness and tolerance. She is given one scene for her frustration to find an outburst, which she seizes tactfully.

It’s the third act of the film, which for me is an anomaly and the highlight of the film. Even though, it is set during the 1999 Kargil War, during which Saxena was deployed as the only female pilot, the film actively resists from going bananas with its nationalistic and patriotic rhetoric, and does not conflate national pride with women’s rights.

It’s a relief to see the film be realistic about the ideas of patriotism and war, where Saxena is depicted to be not an archetype of a nationalist person, but grows to be deeply patriotic with time. The film understands and maintains the difference between nationalism and patriotism.

The climax has enough heft to make you root for Saxena. Even though her contribution during wartime, irrespective of gender, is laudable, the film depicts sexism fairly well in the build-up to the war scenes, which cannot be detached from her success.

In the film, we see a spectrum of men — a super supportive father with a defense background, a cautious older brother in the military, an incorrigibly misogynist superior (Vineet Kumar Singh), and a supportive boss (Manav Vij) who puts credibility over gender.

Each mirror a school of thought and outlook towards equal rights, as we see in the society.

There isn’t anything path-breaking about this biopic, but its ordinariness and familiar storytelling are its strength rather than its weakness.