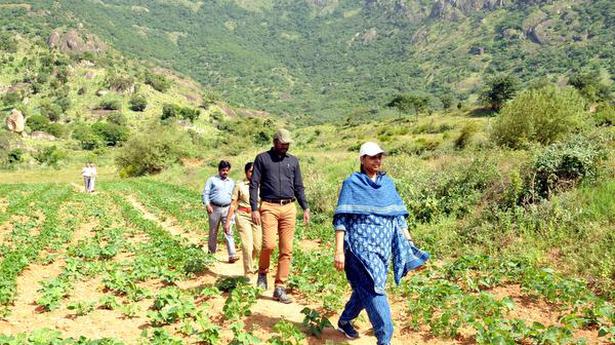 A series of measures have been initiated to ensure peaceful man-animal coexistence in the forest areas in Theni.

After the farmers, holding patta lands close to the reserve forest areas in Thevaram and Kombai like blocks, complained to Collector Pallavi Baldev about the frequent conflicts with elephants, a high level committee was formed with the initiative of District Forest Officer Gowtham and team.

A couple of meetings followed by interactions resulted in the drawing of a broad advisory for the farmers and villagers by the forest officials.

A consensus was arrived at recently in which it was proposed to have three layers of fencing of patta lands close to the reserve forest areas with the government assistance for subsidy. It was proposed to form two teams comprising 15 members each who would be provided with vehicles fitted with public address system, alarms and crackers. These teams would move into the villages close to the reserve forests from 5 p.m. to 7 a.m. The idea was to ensure wild animals didn’t encroach into patta lands and without causing damage to the crops and to mankind, they would be chased into deep forests.

Similarly, during day-time a 12-member committee comprising villagers and foresters would monitor the peripheries of the forest areas. Display boards had been put up at entrances to reserve forest areas. This was just to keep the people aware of the dos and don’ts, a forest official at Thevaram said and added that through the local cable television networks, frequent video clips were being presented about the need for safety by roping in a few notable figures from the film industry.

Although the forest officials had earmarked certain pathways for villagers to move around to graze their goats and milch animals, it had been advised not to use them for two months from now as they apprehended movement of animals on the stretch. According to forest staff, locations including Saakaluthu, Pathinettampadi, Kudiraipaanchan, Ramakalmettu and others were permitted pathways. However, as a precautionary measure, villagers had been asked not to take their goats for grazing during the next two months.

Similarly, the DFO said that the night watchmen who usually slept close to the farms were advised to have a proper shelter instead of makeshift ones. They had been told to have adequate lighting as much as possible in the vicinity.

When some of the farmers were keen to learn the nuances of handling elephants, the forest officials said that they would certainly bring in some trainers from Mudumalai and hold a few awareness programmes.

Last year alone, over two dozen casualties were reported across the forest areas and farmers made it a point to raise the issue with the officials. They also complained about the crop damages.

The new proposals had been widely welcomed by the farmers who hoped they would benefit them and also the wild animals.

Delay in rainfall: Pune’s dams have enough stock to last till end of July