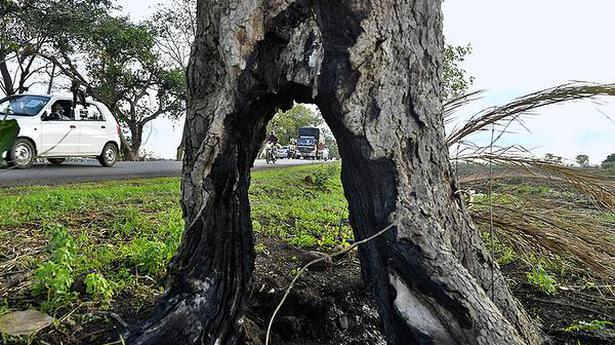 A field survey conducted by Forest department officials has revealed that a total of 83 banyan trees on the Moinabad-Manneguda route were damaged either completely or partially.

The survey was undertaken after reports by The Hindu about a large number of trees being burnt and felled on both sides of the National Highway, and about an online campaign being launched by tree-lovers to save the trees and punish the culprits.

As per the survey report by the Chilukur Forest Range Officer, submitted to the Forest Divisional Officer, Shamshabad, a total of 42 banyans were completely damaged and they included 18 trees which were found sabotaged in June 2019.

The remaining 41 trees were found partially burnt or damaged. They included 13 trees from last year. All in all, fresh damage was found to have been inflicted upon 52 trees. In another survey carried out by a group of individual tree-lovers, who have addressed the online petition to Chief Minister K.Chandrasekhar Rao, the total number of moderately burnt, severely burnt and toppled trees on the stretch stood at 101.

Based on the report, the Forest department issued notice to the Roads and Buildings department, who were officiating on behalf of the National Highways Authority of India, on Saturday, seeking to know the action taken about the damage to the trees.

Fixing the responsibility on the NHAI as owner of the trees, the notice has asked them to respond within one week. Otherwise, action would be initiated against the concerned as per the existing Acts and rules, it warned.

It was also mentioned in the letter that the R&B, on behalf of the NHAI, had sought permission to remove the banyan trees for highway expansion, but the same had not been accorded so far.

Forest officials, on condition of anonymity, said sarpanches of 15 villages lining the highway too were served notices, and explanation had been sought from Village Education Officers. However, enquiries with villagers elicited the reply that the trees were being burnt under the cover of night, and they had no knowledge about it whatsoever.