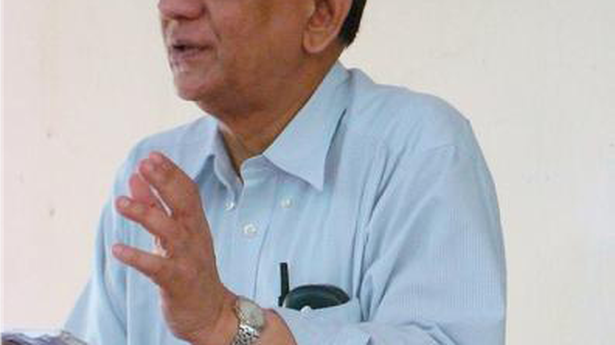 K.A. Padmanabhan has been selected for the ‘Lifetime contribution award in engineering’ for 2020

Former dean of the Indian Institute of Technology Madras K.A. Padmanabhan has been selected for the ‘Lifetime contribution award in engineering’ for 2020 by the Indian National Academy of Engineering.

Mr. Padmanabhan, who was the dean of academic research at the IIT-M in 1996-97, has also served as the director of IIT Kanpur from 1997 to 2001. He is currently a Professor of Eminence (Honorary) at Anna University, Chennai and is also a member of the Research and Innovation Advisory Board of Tata Consultancy Services and as well as its research advisor.

A graduate of Benaras Hindu University with a degree in B.Sc (Metallurgy) in 1968, he did his Ph.D from the University of Cambridge in 1972. He started his career at the Institute of Technology, moving on to Benaras Hindu University and joined the IIT Madars as professor and head of Metal Farming Laboratory in 1980. Later he served as head of the Department of Metallurgical and Materials Engineering at the Institute.

He established the Centre for Continuing Education at the IIT Madars and was its founder chairman. He received a grant of DM 3.2 million from the Federal Ministry of International Cooperation, Germany to set up an Indo-German materials testing facility at the Institute.

He was the founder chairman of the Graduate Aptitude Test In Engineering. He has nearly 48 years of experience in research and development and has been a visiting professor at the Universities in Germany. The award will be presented during INAE’s annual convention to be held between Dec. 17 and 19 virtually.