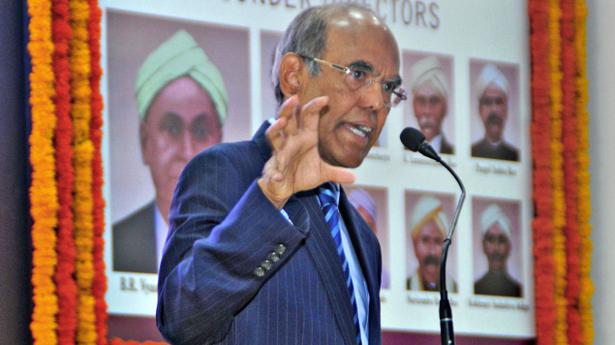 Former RBI Governor D.Subbarao made a strong case for setting up a bad bank saying it is not just necessary but unavoidable in the present circumstances when NPAs are likely to balloon and much of the resolution will have to take place outside the IBC framework.

“Even the Economic Survey 2017 had proposed this idea, suggesting the creation of a bad bank called Public Sector Asset Rehabilitation Agency (PARA) to help tide over the problem of stressed assets.

“The standard advantage of a bad bank is that the entity taking a decision on the sale price is different from the entity accepting that price. Conflict of interest and corruption are avoided, and importantly, are seen to be avoided.

There are some successful models of bad banks with carefully designed carrots and sticks. Danaharta of Malaysia, for example, is a good model to study in designing our own bad bank,” Mr. Subbarao said in an interview to PTI.

The former RBI Governor noted that with the economy contracting by at least five per cent this fiscal year, non-performing assets (NPAs) will balloon.

Also read: Comment | Why a ‘bad bank’ is tricky

Also, according to RBI’s Financial Stability Report, gross NPAs of banks may rise to 12.5 per cent by March 2021 under baseline scenario, from 8.5 per cent in March 2020.

“The bankruptcy framework is already overloaded and it simply will be unable to deal with this huge additional burden. It is important, therefore, indeed more than ever before, that much of the resolution takes place outside the Insolvency and Bankruptcy Code (IBC) framework,” he said.

The growth projections for the current year by various global and domestic agencies indicate a sharp contraction of Indian economy ranging from (-)3.2 per cent to (-)9.5 per cent.

Earlier on, Mr. Subbarao said he had some reservations about a bad bank but, in view of recent experience, he is veering towards the idea of it.

“First, I believed the bankruptcy framework will put resolution on track and help clean up the system,” he said, adding that in hindsight that faith seems misplaced.

Mr. Subbarao admitted that he also had concerns about the capital structure of the bank.

“Where will the funding come from? If capital has to come from the public sector banks (PSBs), the problems that bogged down PSB chiefs from taking bold decisions — fear of retribution — will persist.

“There has been no extraordinary circumstance to challenge the efficacy of the inflation targeting framework… Globally, there have been no hiccups on the financial stability front up until the corona crisis hit us six months ago,” he said.

Mr. Subbarao pointed out that sure, the coronavirus crisis has turned our world upside down and caused a host of problems, but not much on the inflation front.

Noting that there have been no inflation pressures either from domestic or external forces, he said private demand for credit has been low because of, among other things, the NPA problem; so, not much demand push inflation.

The former RBI Governor, however, wondered if the inflation targeting framework will allow the MPC the flexibility and freedom to deal with an unusual situation such as stagflation or volatile capital flows.

On consumer price index (CPI) inflation staying outside the mandated 2-6 per cent target for some months, Mr. Subbarao said he does not see that as a failure on the part of the MPC.

“We are in a very unusual economic situation, hit simultaneously by a demand slump and supply disruptions,” he said adding that and there is a great deal of uncertainty from outside the financial system.

Stating that the MPC had to make a judgement call in this very unusual situation, he said its decision to keep rates unchanged at its meeting earlier this month was in fact informed by the inflation number.

“Contrary to what you imply, in its statement, the MPC has emphasised that it remains conscious of the inflation situation,” he said.

SEBI comes out with guidelines for investment advisors on client segregation, fees