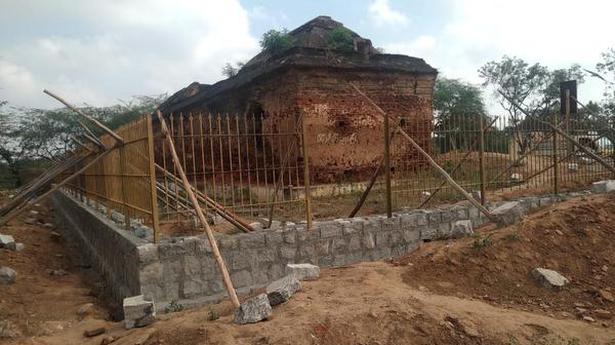 Restoration work at a cost of ₹60.13 lakh being undertaken by govt.

Reduced to rubble in 1800, the fort of the Marudu Brothers at Aranmanai Siruvayal in Sivaganga district, a symbol of resistance to the British, is gradually rising like as a phoenix. The Archaeology Department of the State government has undertaken the restoration work at a cost of ₹60.13 lakh.

“The funding has come from the Asian Development Bank (ADB),” said Ma Foi K. Pandiarajan, Minister for Tamil Development and Culture. The Archaeology Department is using lime and sand paste for the restoration works. While the lime is procured from Kazhugumalai, the sand is sourced from Tiruchi. Workers from Kovilpatti and surrounding areas who have expertise in restoration work are employed. “We are erecting a strong fencing normally designed by the Archaeological Survey of India (ASI),” he said.

The fort and the village fell in the hands of the British on July 30, 1800. “The fine extensive village of Sherewele (Siruvayal), almost destroyed by the flames, which had spread with great fury, accelerated by a high wind, fell into our hands without opposition, although every house was capable of a sturdy defence, and it had a very thick hedge all around it,” Colonel James Welsh, a friend-turned-foe of the Marudu Brothers, had said in his book, the Military Reminiscences.

Welsh maintained a good relationship with Periya Marudu and Chinna Marudu, but fell out with them after they refused to hand over Oomaithurai, the brother of Kattabomman. His reminiscences of the two brothers offer good insights into their characters. The elder brother was called Wella, or Vellu Murdoo, but he had nothing to do with the management of the country. “He was a great sportsman and gave up his whole time to hunting and shooting. Being a man of uncommon stature and strength, it was even said, that he could bend a common Arcot rupee with his fingers,” Welsh had written.

Writing about Chinna Marudu, Welsh says, “Though of a dark complexion, he was a portly, handsome, and affable man, of the kindest manners, and most easy access; and though ruling over a people to whom his very nod was a law, he lived in an open Palace, without a single guard.” It was from Chinna Marudu that Welsh learnt how to throw the spear, and hurl the collery stick, a boomerang-like weapon scarcely known elsewhere. In a skilful hand, it could be thrown to any distance within one hundred yards.

“Yet this very man, I was afterwards destined by the fortune of war, to chase like a wild beast; to see badly wounded, and captured by common peons; then lingering with a fractured thigh in prison, and lastly, to behold him, with his gallant brother, and no less gallant son, surrounded by their principal adherents, hanging in chains upon a common gibbet,” Welsh had recorded.

They were subsequently hanged in Tirupattur.