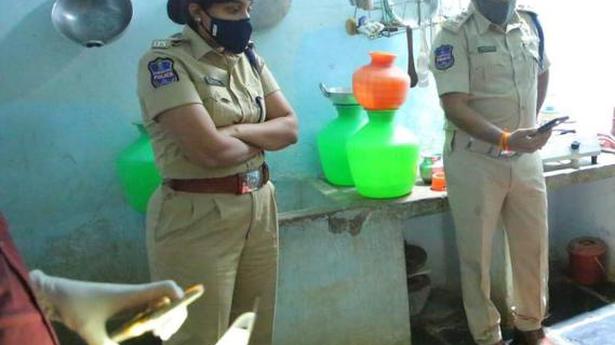 In a suspected case of ‘witchcraft’ for hidden treasure trove, four members of a family, including a sexagenarian and her 10-year-old grand-daughter, were found dead under mysterious circumstances at their residence in Nagapur village of Revally mandal in Wanaparty district here on Friday.

Wanaparthy Superintendent of Police Apoorva Rao, who rushed to the spot, told The Hindu that bodies were found lying at different places in the house.

While Hazeera Bee’s body was found in the kitchen, Asma and her daughter Haseena’s were lying dead in different bedrooms.

“Khaja was found in the rear side of the house, next to a pit, he allegedly dug up for treasure trove. Broken coconuts with ashes in it were found next to every dead body,” Ms. Rao said, adding that the victims were frothing in the mouth.

The investigators also found lemons, eggs, bangles, attar bottle, incense sticks, kumkum, and other puja material in the house. They also noticed a couple of pits in and around the house reportedly dug for hidden treasure.

“There are no resistance marks on the bodies. We suspect that the family members could have accidentally consumed some poisonous substance while performing puja and succumbed,” Ms. Rao said, adding that the exact reason will be known only after the post mortem.

Hazeera Bee, a quack, used to provid Unani medicines to locals, lived alone in the village, located around 50 km from the district headquarters. Her husband, who died a few years ago, was a registered medical practitioner, while her son Mohd Kareem Pasha, is continuing the practice in Wanaparty town.

Her daughter’s family used to live in Nagarkurnool town and earn their living by selling vegetables. Lemon and coconuts were found in the one-foot deep pit beside Khaja’s body.

On August 12, her daughter came to Bee’s house with her family, a day after Haseena turned 11 years. The police suspect the family of doing some ritual on the same night.

The incident came to light around 8 a.m. on Friday when one of the villagers went to the house to get medicine, the officer said.

A few years ago, Ms. Hazeera Bee had a dream of a treasure trove around her house and Khaja often used to dig pits to find them, the sexagenarian’s son told police. After his mother forced him, even Mr. Pasha performed pujas and dug up pits for hidden treasure a couple of times in the past, but in vain.

The bodies were shifted to Government Hospital morgue for autopsy. A case of suspicious death has been registered.