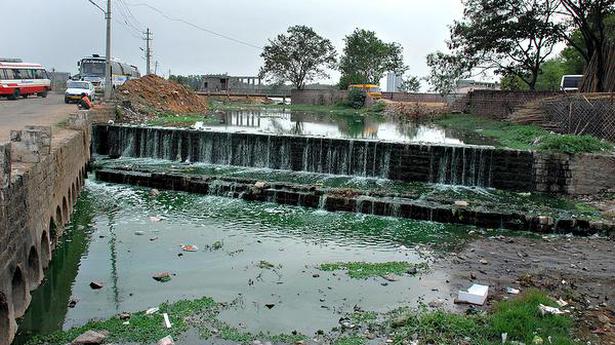 Mayor B. Rammohan has announced on Monday that the Greater Hyderabad Municipal Corporation (GHMC) will be taking up restoration and comprehensive development of ‘Boin Cheruvu’ in Hasmatpet of Kukatpally constituency at a cost of ₹14.45 crore.

Altogether nine lakes have been identified for protection and beautification in the constituency and it will be taken up as part of the ₹282.83 crore sanctioned by the government under ‘Mission Kakatiya’ programme where 19 water bodies are to be restored. The Mayor reviewed the works at a meeting in the presence of GHMC Commissioner Lokesh Kumar, MLA M. Krishna Rao and others where he was informed that the full tank level of all the water bodies have been identified with fencing for six of them completed while three others are to be developed as ponds for Ganesh idols immersion.

Minister for Municipal Administraion and Urban Development K.T. Rama Rao, in a separate function, distributed PPE safety kits to the sanitation, entomology and veterinary workers at the Animal Care Centre of Fathullaguda. He applauded the efforts of the workers in keeping the city clean and in controlling the spread of COVID-19.

Mr. Lokesh Kumar said that about 1.80 lakh cloth face masks, 27,000 pairs of gloves and 25,000 litres of sanitizers were distributed to the sanitation and other staff working on the field at their respective circle office areas. The entire 24,500 safety kits would be distributed to the workers within three weeks, he added.

SRDP: over 500 trees in Hyderabad to be translocated

Chennai Super Kings’ camp in Chennai will be about slowly getting...