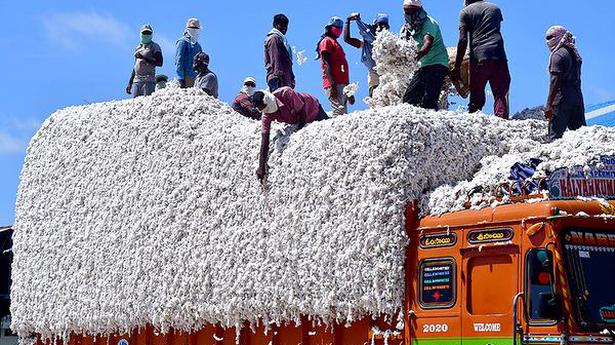 With the cotton season round the corner, small and medium ginning and pressing enterprisers in Adilabad town hope to get sufficient orders from the Cotton Corporation of India (CCI) to process cotton ‘kapas’ into bales.

There are 28 ginning mills, including 14 small units, operating in this industry.

The CCI procures cotton kapas directly from the producers and sends it to the millers to separate cotton fibre from the seed bolls and dust particles. The cotton lint is further compressed into bales.

“Last year, we did not get sufficient orders for processing, and mostly remained idle. We fervently hope that the CCI would equitably distribute job orders among all the existing units,” a ginning mill owner said.

“The small units got cotton too short of their processing capacity,” he alleged.

However, CCI General Manager of Adilabad district, Sanjay Kumar, said that based on their requirement, the process orders would be placed in the coming season as well.

“We do not discriminate between small and big millers. But, based on our delivery schedule we assign work,” he said.

“This year due to late rainfalls, the season is expected to start a few days before or after Dasara, for which we are preparing at a brisk pace. We have already identified warehouses for storing the bales,” Mr. Kumar said.