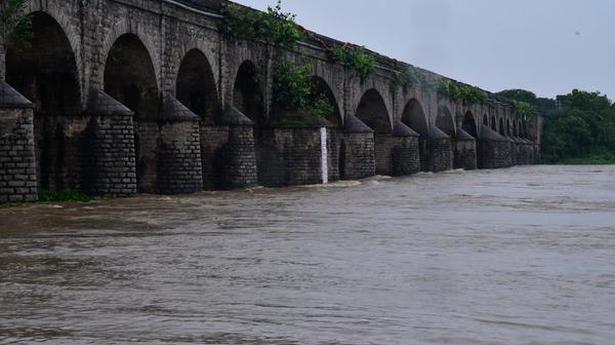 As heavy rains pounded the upstream areas of the Godavari for the second consecutive day, the water level in the river continued to swell and hovered around 35 feet at Bhadrachalam on Thursday evening.

The Godavari flowed nearly eight feet below the first warning level of 43 feet at the temple town at 6 pm on Thursday, sources said.

The bathing ghats on the banks of the river were partially submerged as heavy inflows from the catchment areas of the river, mainly the surging Taliperu flood waters, pushed up the water level in the Godavari at the famous pilgrimage centre.

The tribal-dominated Bhadradri-Kothagudem district received an average rainfall of 88.9 mm in the last 24 hours, ending at 8 am on Thursday. Burgampadu mandal recorded heavy rainfall of 173 mm followed by Bhadrachalam 151.2 mm and Palvancha mandal 140.4 mm.

The Yellandu and other areas in the coal belt also witnessed heavy downpour, severely disrupting coal production in almost all the opencast projects (OCPs) in the Kothagudem region on Thursday, sources said.

The Taliperu, the Kinnerasani and other rivers besides all the streams originating in the forest areas in the Agency mandals of the district were in spate.

The district administration set up a control room at the Collectorate (08744-241950) to constantly monitor the rain situation and deal with any exigency arising out of the incessant rains and rising water level in the Godavari.

Control rooms were set up division- and municipality-wise to tackle any flood exigency and rain-related incidents as per the instructions of Collector M V Reddy.

There was a sharp rise in the water level in Munneru river at the district headquarters town of Khammam, prompting the residents of low-lying areas along the rivulet to remain alert.

Two houses were partially damaged in Burhanpuram in the town when a portion of an old house reportedly caved in under the impact of incessant rains. No one was injured in the incident.

Key takeaways from US Department of Treasury’s FinCen Files – Times...