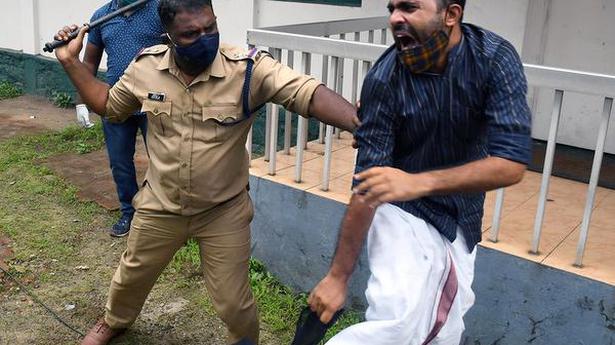 Workers of the Congress and the Bharatiya Janata Party (BJP) shouted slogans against Chief Minister Pinarayi Vijayan as the motorcade of the National Investigation Agency (NIA) escorting the accused in the gold-smuggling case swept past them as it sped from Palakkad to Kochi on Sunday.

The anti-government protests that violated physical- distancing strictures and threw caution against the transmission of COVID-19 to the wind unfolded across the State for the third consecutive day. The Opposition parties attempted to convert the optics of the televised daytime spectacle of the accused being brought to court into a damning indictment of the alleged links of Mr. Vijayan’s office with Swapna Suresh, an accused in the case.

Leader of the Opposition Ramesh Chennithala escalated his attack on the government.

In an open letter, Mr. Chennithala asked Mr. Vijayan how Swapna and her alleged accomplice Sandeep Nair could move unchallenged from Kerala to Bengaluru when the pandemic-impelled travel restrictions remained in place. He wondered whether the State police helped the suspects flee Kerala.

Mr. Chennithala asked Mr. Vijayan why M. Sivasankar, former Principal Secretary to the Chief Minister, remained in service though hard evidence about his close association with Swapna had emerged in the public domain.

Mr. Chennithala reiterated his demand to bring the Chief Minister’s Office (CMO) under the ambit of the ongoing probe. He demanded a police inquiry into how Swapna gained “government employment” by “faking” her academic credentials.

In an article in the Veekshanam newspaper, Kerala Pradesh Congress Committee (KPCC) president Mullappally Ramachandran described the CMO as a den of anti-nationals.

The parties are expected to unleash more street protests in the coming days.

Government yet to name MPC nominees – Times of India