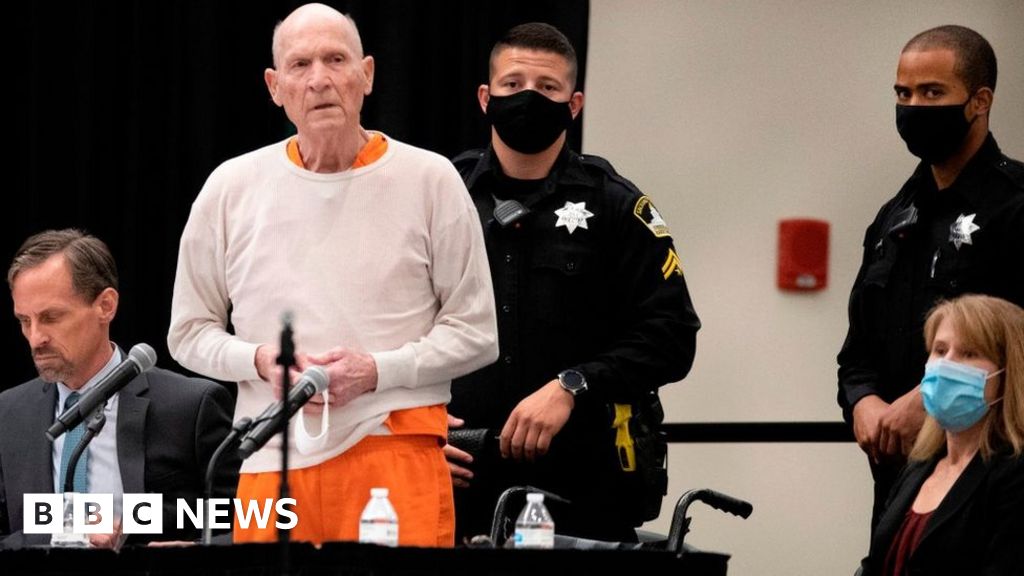 Joseph DeAngelo, the man known as the Golden State Killer, has been sentenced to life in prison.

His sentencing is the culmination of a crime investigation that began in the 1970s and attracted worldwide interest.

DeAngelo, 74, was arrested in 2018 after his DNA was found on a genealogy website.

In June he admitted to 13 murders in a deal with US prosecutors meant to spare him the death penalty.

He also admitted to numerous rapes, burglaries and other crimes at the time.

After sitting silent and expressionless throughout victims’ testimony this week, DeAngelo addressed those in court on Friday, removing his mask and rising from a wheelchair to speak, shortly before Judge Michael Bowman began the sentencing.

“I’ve listened to all of your statements. Each one of them. And I’m truly sorry to everyone I’ve hurt,” DeAngelo.

The infamous killer will now likely die in prison, serving 11 consecutive life terms without the possibility of parole, with 15 concurrent life sentences and other time for weapons charges.

“When a person commits monstrous acts they need to be locked away where they could never harm another innocent person,” Judge Bowman said.

Prosecutors ultimately did not seek the death penalty, due partially to California’s moratorium on executions. Judge Bowman said on Friday that the sentence he chose was the “absolute maximum” the court was able to impose under the law.

“The survivors have spoken,” he said. “Clearly the defendant deserves no mercy.”

DeAngelo was a Californian police officer during his crimes in the 1970s and 80s and his crimes stretched across the state of California.

The former police officer, Vietnam War veteran and auto mechanic was arrested in April 2018 after police tracked him down by matching his DNA with a genealogy website.

Investigators designed a new method of DNA tracing, creating a family tree dating back to the 1800s in order to identify him as a suspect. Detectives followed him and collected a piece of rubbish he had thrown away, finding the same DNA recovered from several crime scenes.

Prosecutors said on Friday that this method has since been used to solve nearly 100 additional crimes.

DeAngelo’s murderous reign began in 1975, while he was working as a police officer in Exeter, in northern California.

Starting with lurking, stalking and theft, his crimes quickly escalated to a 12-year spree of brutal violence, rape and murder.

“He is a person who lacks a conscious or a soul.”

Ms Schubert then assailed DeAngelo’s appearance at trial: an ostensibly fragile old man, escorted to the courtroom in a wheelchair.

The prosecutor played video footage of DeAngelo in his jail cell in June and July: doing exercises, hoisting himself up on to the top of a bunk bed, and taking painstaking, careful efforts to block out the light in his cell.

The videos demonstrate his “mental acuity, his dexterity, his ability to deceive, or attempt to deceive, the entire world into believing he is a feeble old man,” she said.

Prosecutors have described the scale of violence as “simply staggering”: spanning 87 victims and 53 crime scenes in 11 counties across California.

And the sentencing occurred in a university ballroom – the space needed to hold surviving victims and their families.

Answering questions on Friday, Ms Schubert said it was possible there were still unidentified victims remaining.

“I don’t believe we will ever know the magnitude of what Mr DeAngelo did,” she said.

‘I felt that I had died’

Earlier this week, some of his victims had their day in court, giving emotional personal testimonies during his sentencing hearing. Many spoke of lifelong scars and painful struggles to heal the damage left by DeAngelo.

That included Kris Pedretti, who was 15 when DeAngelo raped her in December 1976. She spoke of how he threatened her life during the attack.

“At three different times that night, I thought I was going to die,” she said.

“The next morning, December 19, I woke up knowing I would never be a child again and, although I was truly grateful to be alive, I also felt that I had died.”

The court also heard from Pete Schultze, who was just 11 years old when DeAngelo broke into his home and raped his mother.

He said that DeAngelo stole his mother’s wedding ring, other jewellery and money as part of the 1976 attack.

“But he did not steal the happiness, dreams and spirit of our family,” Mr Schultze said, addressing DeAngelo in court this week.

“Your suffering, sir, has just begun,” he said. “The boogeyman is gone.”

“The defendant’s criminal actions have had a devastating and pervasive affect on my life and my family,” Ms Huddle wrote. “I will never be the same person. I now live everyday with the knowledge of how he attacked and severely damaged hundreds of innocent people’s lives.”

Ms Huddle wrote that she had trusted her husband, to be “doing what he said he told me he was doing” – working late, pheasant hunting, or taking trips hundreds of miles away.

“I have lost my ability to trust people,” she wrote.

The pair had been separated when DeAngelo was arrested in 2018 and their divorce was finalised a year later.